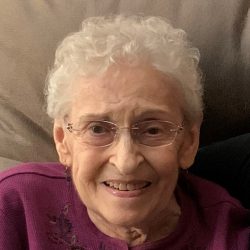 It is with deepest sadness that the family of Jane Fern (Farrington) LaHair announce her passing, at home, on November 8, 2022, at age 86.

Jane was born on October 20, 1936, to Francis & Agnes (Oakes) Farrington, and raised in Norwood, NY. Shortly after marriage, she and her husband, Robert, spent the next 25 years raising their family throughout various states in the mid-west, due to job relocations. After her husband’s retirement, they moved back to the North Country (South Colton) where they ran a small engine sales and service business called J&R Ventures. She was his administrative assistant until his passing in 1992, when the business closed.

Widowed in her early 50’s, she lived independently at “Ferngully”, her home in the woods outside of South Colton, where she enjoyed nature, and by virtue of living alone, taught herself how to repair various things around the house. She was an active member of the Alter & Rosary society in her church.

Due to health concerns, she moved to Victor, NY in 2007 to live with her youngest daughter, Peggy, & son-in-law, Fred, until her death. There, she adored her furry grandchildren, Leila (cat), Gunar & Hazel (dogs) and formed an unlikely relationship with a brown iguana, Shino, and was the reason it lived to be 17. She could spend hours watching the butterflies and birds and had a special fondness for hummingbirds and owls. Naturally curious, she enjoyed reading books, surfing the internet and watching TV, especially Buffalo Bills football. Her favorite foods were oatmeal for breakfast, PB & J sandwiches for lunch, pizza, popcorn and all things lemony.

A private Celebration of Life will be held at the convenience of the family. If you wish to honor her memory, donations can be made to Wild Wings Inc. (a local raptor and wildlife sanctuary) or the animal shelter of your choice.