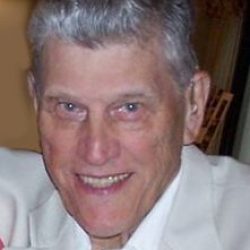 John Hoff, beloved husband, father, grandfather, and uncle passed away peacefully at home with family on November 24, 2022, after a blessed 97-1/2 years of life. He was a tall, kind-hearted man with a commanding presence, wide-ranging background, and diverse interests, including three different careers.

John was born in Rochester, graduated from high school at the age of 15, and entered the University of Rochester at the age of 16. In 1943, after completing his sophomore year, he enlisted in the U.S. Navy where he completed navigation training at Columbia University. He served in the South Pacific during World War II, as an officer navigating an LCI (Landing Craft Infantry).

After active duty, he served in the U.S. Naval Reserves for 23 years and retired with the rank of Captain. After WWII, John returned to the University of Rochester to complete his B.S. degree in Chemical Engineering and later became a licensed Professional Engineer in New York State.

John worked for Eastman Kodak Company for 41 years as a Chemical Engineer. He then worked as Deputy Director of the Monroe County Department of Building and Equipment and was tasked with the environmental cleanup of the Iola Powerhouse. Upon retirement from Monroe County, he became an independent engineering consultant and designer of backflow systems.

He was elected to office, and served on the Monroe County Legislature, representing the Town of Greece for 13 years, with 4 of those years as Majority Leader. He was also President of the Professional Engineering Society and of the Rochester Engineering Society; a Trustee of the Margaret Woodbury Strong Museum; and was named Monroe County Engineer of the Year in 1974.

John traveled the world, both with the Navy and with his beloved wife of 68 years, Peggy. He proudly visited all 50 states, finishing the list with North Dakota when he was 93 years old. He enthusiastically embraced technology in the 1980s by purchasing an Apple II+ computer and continued to upgrade to Apple’s latest products for the rest of his life. He also enjoyed woodworking, golf, and family vacations, many involving water and snow skiing, and Scrabble games with his daughters. A recent highlight was his participation in the Honor Flight with his son.

Family and friends are invited to call on SUNDAY, December 4, from 4-6 PM at Miller Funeral and Cremation Services (3325 Winton Rd S). John’s Memorial Service will follow at 6PM in the funeral home’s chapel.

As a tribute to John, adopt his motto, “Always keep your sense of humor.”

In lieu of flowers, John’s wish is to support the Rochester Engineering Society (www.roceng.org) and the Honor Flight Network (www.honorflight.org).