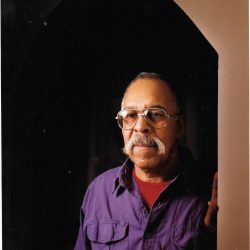 Bobby was a life-long resident of Rochester and very proud of his Clarissa St. roots. He went to #3 school, graduated from Madison High School and received degrees from Monroe Community College and Empire State College. Bobby worked many jobs but one of the most rewarding was the 25 years he worked as a substance abuse counselor (CAC). Bobby was a prolific writer and performer. He published five books of poetry and taught in universities, schools, prisons, and community organizations. Bobby loved jazz and was affectionately known as the “be bop poet”. He is immortalized in the Poets Walk of the Memorial Art Gallery. Bobby was well known for his infectious laugh, his sharp wit, and his indomitable spirit, overcoming challenges with grace, determination, and optimism.

Family will remember Bobby in a private service and burial. A public Memorial is being planned for the spring with details to follow. In lieu of flowers, donations may be sent in Bobby’s name to Writers and Books or the Brain Injury Clinic of Nazareth College.