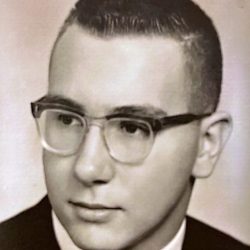 He was a graduate of Rush Henrietta High School, class of 1961 and continued his studies at Winona State, receiving his bachelor’s in education in 1965. He went on to receive his master’s in education from the University of Colorado in 1967.

Jim had a fulfilling career in teaching. He was a lifelong learner and loved U.S. history. He worked as a teacher in Wisconsin, California, U.S. Virgin Islands, Wheatland-Chili, Rush-Henrietta and lastly Pittsford Central School District. He taught 5th grade at Allen Creek Elementary School and retired in 2004.

In his spare time, Jim loved watching college football, especially Syracuse University. His goal was to visit and see as many different stadiums as he could in hopes to see them all. He was also a loyal Buffalo Bills fan and enjoyed watching them every weekend during football season. He loved spending time with his dog Sabre, she was his baby and won his heart over.

Jim had a great passion for traveling. He loved to travel across the country and tour the historical museums of every area he visited. He collected all kinds of memorabilia such as coins, post cards, baseball cards, and programs of every sporting event he attended.

While Jim’s health had deteriorated over the last several years, he remained mentally sharp, fought hard to overcome his illness, and spend more time with family and friends. He will be greatly missed by all for his sense of humor, love of sports, his in-depth knowledge of multiple hobbies and politics. Those that knew Jim thought of him as a loving and generous friend. He valued and treasured all his great friendships, some near and far he had over the years.

Family and friends are invited to call on Saturday, December 10th, from 2-4 PM at Miller Funeral and Cremation Services (3325 Winton Rd S). Jim’s Memorial Service will follow at 4PM in the funeral home’s chapel. In lieu of flowers, contributions may be made to the Humane Society at Lollypop Farm. 99 Victor Road, Fairport, New York 14534. Donate Online