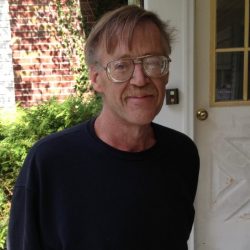 He was born in Rochester New York on April 6, 1955 to Ruth E nd G. John McNeil, who preceded him in death. One of four brothers he was raised on a farm in Mendon New York and graduated from Honeoye Falls lima high school. He was an alumnus of Alfred university with a bachelors degree in marketing. he worked in his father’s hay and grain business and later for U-Haul of Rochester, at one point rising to manager of the Henrietta store. illness, retired him in 2018

Jim had many interests including motorcycles, cars, white water rafting, camping, photography, and astronomy. He obtained a private pilots’ license and would take his brother Peter and nephew John flying over the Bristol Valley.

He had an extensive collection of aviation prints as well as an extensive library of military history of the 20th century.

Jim’s happiest time was as a college student doing an astronomy inter- term on the island of San Salvador in the Bahamas in 1976. He learned to sail and harbored dreams of captaining his own boat in the Caribbean but circumstances dictated otherwise. he later wrote that it was there that he really felt a sense of easiness and serenity, wishing others the opportunity to go sailing and listen to the sound of the wind and the waves undisturbed.

Jim’s only regret was his failure to leave a more living legacy, such as an offspring and a legacy as a loving relative, husband, and brother. He never married and had no children but always took an interest in his nieces and nephews even if from afar and sent holiday and birthday greetings regularly to his brothers.

The fuller fruits of life were denied him because of illness. We cannot all become the men we want to be, but we are all God’s children.

He wished to be cremated, and his ashes scattered off the island of San Salvador in the Bahamas, off Sandy Point.