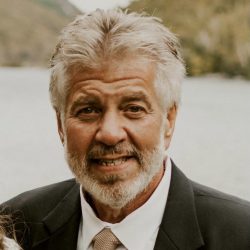 Michael left this world surrounded by family on January 2, 2023 after a too short, too difficult but courageous battle with cancer. Michael was born on December 18, 1954 to the late Basil William and Irene Mesologites Proukou. Michael’s dear sister, Beth, also preceded him in death. Michael is survived by his wife, Cindy, and three wonderful sons: Nicholas (Randi), Alexander (Gia) and Christopher (Irene). Theo (Lorraine) Proukou also remains a remarkably dear “brother-son” gift throughout Michael’s life. Michael had the great honor of being “Papa” to three delightful grandchildren: Levi, Lilah and Emma. Michael is also survived by two brothers: Spear X (Carlette) Proukou of Russell PA and Theodore William Sr. (Katherine) of Burgaw NC.

As the youngest son born to Greek immigrants in Warren PA, Michael’s formative years were shaped by the restaurant business and the small town in which he lived. His strong work ethic declared itself early as he felt compelled to repeatedly organize Beth’s apartment kitchen in Philadelphia and as he worked in the family restaurant. Michael’s deep commitment to the community to which he belonged was shaped early as well through watching his parents interact with each restaurant customer. “You are a stranger here but once” was the motto of his parents. Customers often became friends made to feel welcome in the restaurant or in their home. Michael’s strong work ethic and precocious socializing would remain a fundamental component of his being for the remainder of his years.

Michael left the family restaurant business around 1977 and, with some trepidation, joined the Pizza Hut franchise in Jamestown NY. He was quickly promoted to manager and then to area supervisor within the organization. Michael continued to work with the Pizza Hut organization until 1988. He had several interim jobs during the next several years including a two-year period of being Mr. Mom. Michael began his school transportation career in 1995 as a substitute bus driver for the Rush-Henrietta School District. With no background in school transportation, Michael benefited from wonderful mentoring (BIG thanks to Jack Gaffney and Deb McGowan!) and maintained his strong work ethic, organizational and interpersonal skills while retaining and growing the management skills learned in the School of Life. Michael was Head Driver for the Rush-Henrietta School District from 1996 through 2001. Michael then moved to Spencerport Central School District as the Director of Pupil Transportation where he served from November 2001 until his retirement in March of 2017. Through those 16 years at Spencerport, Michael met and maintained some of the closest and finest friends through Spencerport School Administration colleagues as well as colleagues who were directing surrounding school district pupil transportation programs. It was this group of friends that providing the support, the outings, the breakfasts, the phone calls, the ice cream, and the upbeat and happy reminiscing that made Michael’s brain tumor journey bearable.

Career achievements aside, the most important thing to Michael was family. His 43 year marriage to his wife, Cindy, and being a father to Nick, Alex and Critter were perhaps his proudest achievements. In his most reflective moments, Michael would state that he grew as person because of his wife and that growth allowed him to navigate the inevitable struggles in life. It was this sentiment that made Michael deeply grateful for the three wonderful women present in his sons’ life as his daughters-in-law. Until his death, Michael maintained that Randi, Gia and Irene were so good for his sons and that each of their marriages would allow continued personal growth.

Michael reveled in his friendships. A consummate extrovert, Michael relished his time with the many friends he developed along the way. This space could never be long enough to express Michael’s appreciation for all of the wonderful and loving people in his life. Suffice to say, Michael loved Betsy, Kendall, The Neighbors, Cousins Dean and Linda as well as his neighbors, many friends, and extended family completely. Through this past year, Michael never failed to make note that he was grateful to have this year to let his friends and family just how much they meant to him.

Finally, but far from least, are the grandchildren. The center of Michael’s later life may well have been the loving relationships developed with his three grandchildren. Papa leaves behind Levi, Lilah and Emma and far too many unsung songs, unbuilt models, missed adventures, untold jokes and missing cuddles. Papa is one of the best people many of us have ever had the joy of knowing.

Funeral and Celebration of Life service will be held in April.

In lieu of flowers, donations may be made to: