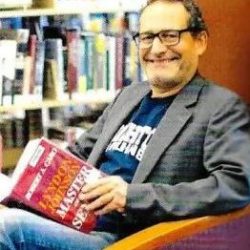 David was a Brighton High School graduate, and never shed his Brighton roots. David had a brilliant mind, and went on to attend Brown University, the University of Wisconsin, and the University of Rhode Island, where he obtained his PhD in English. Like his mother Carol and grandmother Mabel, he was a natural educator, and he taught high school and college students at many places in the Rochester area, including the Rochester City School District, Monroe Community College, the Rochester Institute of Technology, Keuka College, and St. John Fisher College. David was also a Fellow at Nazareth College Center for Public History and Storyteller in Residence at the Smaller Matters Institute.

In addition to teaching, David was a writer, historian and scholar who published numerous guest essays, letters, and book reviews. One of his many passion projects was a screenplay he wrote based in part on his dissertation on the Spanish-American war, in which he imagined an alternative history where Red Badge of Courage novelist Stephen Crane became a filmmaker.

But David is most known in Rochester for his self-made online magazine Talker of the Town (Talkerofthetown.com). David was a prolific chronicler of the history, politics, culture, and personalities of his hometown.

Perhaps the best way to understand David’s creativity and intellect is to look through his magazine, launched in 2013. He wrote most of the articles and took most of the pictures himself, working tirelessly in his office every day researching his stories and talking with people—from the local shoe repair guy who gave him a free pair of boots to the candidates for local offices who were canvassing in Brighton. His family and friends as well were featured in many more personal stories, a precious gift.

He provided a forum for other local writers and poets to publish their work, including Michael Nighan, Bill Pruitt, and others.

David’s passions extended to sports as well. He umpired for local baseball and softball games for decades, played with the Brighton “Game at the Corners,” and was a diehard fan of the Buffalo Bills. He meticulously maintained a baseball card collection, which sometimes got mentions in his magazine. His friends have joked about his competitiveness. Whether it was chess, wiffle ball, darts, or Monopoly, he played to win.

A tribute to his kind and generous spirit are the many lifelong friendships he has maintained since childhood. Brighton friends Dean Tucker, Bruce Kay, Eric Kemperman, Stephen Shapiro, and Andre Marquis were always there for David, and he for them.

A private gathering to celebrate David’s life will be held at the end of January.

In lieu of flowers, please make a donation to GeVa Theatre Center (gevatheatre.org).