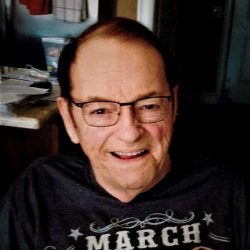 William “Bill” Clark of Pittsfor/Henrietta, passed away peacefully on January 8, 2023, with his wife at his side, at age 76. He is survived by his loving wife of thirty ½ years, Margaret “Peggy” Montaglione Clark. He is predeceased by his parents Louis Morris and Gertrude Rudman Clark; brothers Louis Clark, Jr., Guy Clark, and Douglas Clark; Sisters Barbara Stewart and Connie Snyder. Bill was born in Rochester, New York. He graduated from the Rush-Henrietta Central School. He proudly served our country as a Sargent in the U. S. Army from 1966-1968 in Qui Nhon, Vietnam. He had been employed by Lehigh Hanson Aggregates, Inc. and Halpin’s and Sons. He loved his Boxer dogs, Harley Davidson, and Chloe Marie. He was an avid race car fan and traveled to NASCAR tracks all over the country and Race of Champions asphalt tracks in NY/PA. He loved his Corvettes, all seven, and belonged to the Rochester and National Corvette organizations. He was loved by everyone who knew him. He is survived by his sister Ginny Smith and brother C. Scott (Madelon) Clark. He leaves behind many nieces and nephews and great and great-great nieces and nephews who all loved and adored their Uncle Bill.

Calling hours will held on Monday, January 16, 2023, from 4:00 PM to 7:00 PM at the Miller Funeral Home, 3325 Winton Road South, Rochester, New York. Bill’s funeral Mass will be on Tuesday, January 17, 2023, at 10:00 AM at Our Lady Queen of Peace, 601 Edgewood Avenue, Rochester, New York. Click HERE to livestream the Mass. Internment with military honors will be at St. Mary’s Cemetery in Waterloo, New York.

or a charity of one’s choice.