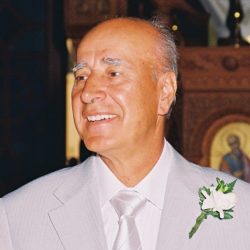 Nik was a world traveler, a free spirit, and a committed family man. Nik was a man who could take any idea and manifest it into reality. He was the hug you needed when you needed it and a fixer of everything. He was the life of the party with the memory of an elephant.  He could remember a joke exactly the way it was told to him 40 years ago.  And he LOVED telling jokes (some that would make you blush). He was a walking encyclopedia of knowledge and random facts who (sadly) missed his calling to be a contestant on Jeopardy. You could ask him anything and he would always know the answer.

Nik was a wise and gentle philosopher who could find the lesson in any situation. He was a fierce warrior who taught his children to never give up and to always fight for what they believe in. A man of action, he led his teachings by example and determination until his dying day. His biggest love was his wife and family. Nothing made him happier than having all of them under the same roof and close to him. His is the ultimate success story, for he has left behind a legacy of love, light, and laughter. He was truly a gift to the world and will be sorely missed. Even in death, he is with us always.

Interment will be held at White Haven Memorial Park with a Makaria (Mercy Meal) to follow.

In lieu of flowers donations can be made to St. Jude’s Childrens Hospital (LINK)