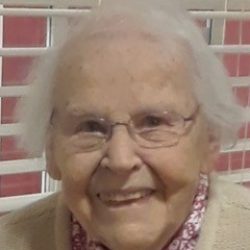 Mary Grace Coleman Crerand died peacefully on Tuesday, September 22. Mary Grace was born in Clifton, New Jersey, on April 29, 1928. She attended Benedictine Academy and Chestnut Hill College, in Philadelphia, to which she remained a loyal alumna, returning throughout her life to five-year reunions with her beloved suite mates. It was while at Chestnut Hill that Mary Grace met her husband of 49 years, Peter Joseph Crerand, a graduate of Villanova University. Mary Grace and Joe raised five children and welcomed eleven grandchildren. Mary Grace was blessed with four great-grandchildren.

A devout Catholic, Mary Grace unquestioningly assumed that she would live a life of service. When her children were still young, she began a career of charitable work. Father John Reddington, then pastor of St. Louis Church, in Pittsford, asked Mary Grace to be the first president of the Ladies’ Guild, a group through which he sought to encourage the women of St. Louis to serve their community. Mary Grace was president of the guild for two years. She went on to participate in other Catholic organizations, including the McQuaid Auxiliary and Seton. Though self-effacing and reserved, Mary Grace’s commitment and good judgment found her often in charge of projects and events.

In 1982, Mary Grace began a relationship with Monroe Community Hospital that lasted for 35 years. When she joined the auxiliary board of volunteers, her first activities were organizing sing-alongs, shopping trips, and other social diversions for the residents. She quickly began to take an active role on the board, growing more informed and involved with each year. She served as president of the auxiliary board for thirteen years and was known for recruiting committed board members. She was also a founding member of the Monroe Community Hospital Foundation and remained an emeritus member. She continued to volunteer at the hospital’s gift shop until 2017.

In her 40s, Mary Grace took up tennis and played into her 80s with women who became good friends. She also held satisfying retail positions at Lock, Stock, and Barrel; the Pittsford Department Store; and Cohos Clothing Outlet. In recent years, she developed a keen enthusiasm for the University of Connecticut women’s basketball team, followed the athletes avidly, and received grateful acknowledgment from the young women.

Mary Grace was predeceased by husband Joe and by her eldest son, Kevin C. Crerand, a deeply respected Monroe County deputy county executive. His legacy lives on in two Crerand Commons affordable housing projects in Gates. In her widowed years Mary Grace received excellent care and companionship from her son Peter, for which all of the siblings are sincerely grateful.

In thought, deed, and selfless service, Mary Grace lived an exemplary Christian life, embracing the message of her cherished St. Francis of Assisi: “For it is in giving that we receive.”

A Funeral Mass will be held at St. Louis Church, 64 South Main Street, Pittsford on Monday, September 28th at 9:30 a.m., followed by the interment for immediate family. In lieu of flowers, the family encourages donations, in Mary Grace’s name, to Monroe Community Hospital Foundation (435 East Henrietta Road, Rochester, NY 14620). To leave a message or favorite memory for her family, visit www.Miller1889.com.