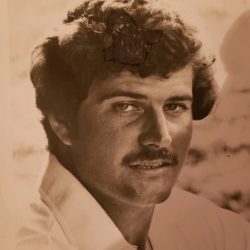 Victor – August 17, 1954 – December 15, 2020. William Kevin Walsh, 66, passed away suddenly on December 15, 2020 in his home outside of Victor, NY. Bill was born in the City of Rochester on August 17, 1954 to the late William and Mary Walsh. In addition to his parents, Bill is preceded in death by his brother, Mike and loving wife Lisa. Bill is survived by his loving children, daughter Katie and husband James Sapp of Victor, NY; son Derek and wife Stacey of Erwin, NC; ex-wife Beth Walsh; sister-in-law Mary Walsh; Grandchildren Erin, Gia, and Layla; along with many nieces and nephews.

Bill enjoyed a full life with loving everyone who he came in contact with. Bill was an individual who would do anything for anyone at any time. Bill’s first love was golf where he excelled as a young teenager with winning the RDGA Junior Golf Championship. Bill graduated high school from the Aquinas Institute with sports being on the forefront with playing basketball and golf. After high school, Bill immediately became a golf professional and won his very first tournament at age 17 to start an extremely rewarding career in the golf industry for 48 years. Bill worked at many different golf courses as a professional including Braemar and Chili Country Clubs. Bill really enjoyed and excelled at teaching golf to anyone. He would spend countless hours on the range trying to get the best out of everyone. Most recently was working at Big Oak Driving Range and heading up many programs at this facility.
What really made Bill happy was to spend time with his children and grandchildren. Sports was always his thing if it meant attending events including soccer, basketball, baseball and softball games. It didn’t matter whose kid he was watching “Papa” was there. Bill was a teacher about life which related to sports and what he taught his children every day. His real passion was to be with his family at any sporting event, being a Buffalo Bills season ticket holder or just any local high school event he could go support. Bill was an avid collector of sports memorabilia and enjoyed cooking meals for anyone that came to his house.
Bill leaves behind a legacy of touching everyone’s heart that he encountered, loving his family dearly, and the golf industry in Rochester, NY will not be the same without him.

A celebration worthy of his life will be held at a later date.