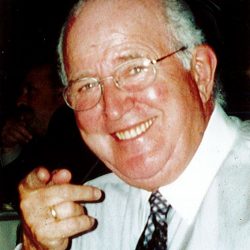 When he retired to his home in Macedon, New York he began to broaden his scope of interest by making exquisite furniture in his beloved home workshop.  Vince was inspired by timeless American design and was always on the lookout for the perfect piece of wood.  He was very respectful of his environment and the good tools that helped him along.  Eventually Vince began selling his benches on Martha’s Vineyard and several antique malls in WNY.  His greatest pleasure was making pieces for his family and friends.

His other passion in life was his joy of travel in his perfectly equipped motor home. Trips were well planned and carried out with enthusiasm to places he had always dreamed of seeing.  He eventually found the perfect campground in Jekyll Island, Georgia.  There he would take his walks to the pier and watch the large boats enter and leave the harbor.  Later in life he and Nancy joined many in-law cousins and friends who were also passionate about the island.  Vince loved life and all who would sit and challenge him with a good political debate.

The LaRouche family would like to extend a special thanks to the staff at The Jewish Home of Rochester for their dedicated and compassionate care they gave Vince over the years.

A Memorial Service will be held at the convenience of the family.