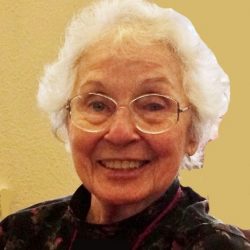 Berthe is survived by her loving daughters Laura Santirocco of West Hartford, CT, Paula Santirocco of East Rochester and Carla (Toby) Clark of Pittsford, and grandchildren Thomas and Grace Clark of Washington, D.C.  She was predeceased by her husband Raymond Santirocco and grandson Tyler Martin, and her sisters Marie Cedars and Jacqueline Harmel.

Berthe was born on July 24, 1931 in Brooklyn, New York, the youngest of three daughters born to Harry Meisel and Leona Virginie Denaes, a Frenchwoman who met Harry during World War I.  Despite years of hardship during the 1930’s due to the Great Depression, she attended grammar school in Brooklyn and was a good student.  She began high school at Erasmus Hall High School in Brooklyn, but then moved to Rochester at the age of 14 to live with her oldest sister and her husband and graduated from Monroe High School in 1949.  She attended the University of Rochester as a Government major.  She met her future husband, Raymond Santirocco (a physics and astronomy major who later got a PhD there as well), when they played the leads in a production of William Saroyan’s “Hello Out There.”  They married in 1955 and had the first two of their three daughters while Ray was still in graduate school.  After living in the City of Rochester until 1967, they moved to the Town of Penfield where Ray ultimately entered political life.  Berthe worked alongside him in politics for many years, enjoying the political life, and meeting many people who still number among her large circle of friends.

Berthe was formidably smart and her many interests included arts and crafts, painting, drawing and sewing. She stayed home when her daughters were young but rejoined the workforce as they got older and held a number of jobs including at Bathtique International where she was the executive assistant to the CEO and in the University of Rochester’s Political Science department. Sharing her husband’s interest in local politics,  she served the town of Penfield on its Zoning Board.  She was a member of the Arts and Cultural Council of Greater Rochester and the Penfield Art Association; her work was featured in several exhibits. She was also active in University of Rochester alumni affairs for many years.

After Ray’s death in 2004 she moved to Solstice Senior Living in Fairport where she made more new  friends and participated in the many activities offered there.  She was a lifelong learner and in her 80’s took a course in calculus and joined trips to the opera.  She had lived at Heather Heights in Pittsford since 2019.

Berthe always had a smile and greeting for everyone; she never lost her interest in other people, interviewing new residents for Solstice’s newsletter, always asking her carers about themselves and their families and unfailingly thanking them for their care and help.

In lieu of flowers the family suggests considering a donation to the Rochester Area Community Foundation – Raymond A. Santirocco Memorial Piano Fund (www.racf.org/fund/raymond-a-santirocco-memorial-piano-fund) which provides awards for student musicians.

The family would like to thank the staff of Heather Heights and Highland Hospital and Jeannine Shults, Sally Hoffman and Anna Hernandez  for their support  and care.
Services and interment will be private.