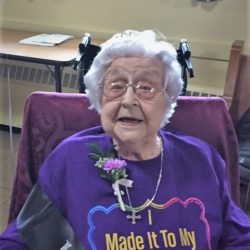 Ethyl Virginia Steffens was born February 16, 1920 in Lackawanna, NY. She married Robert Steffens in September 7th, 1946 and moved to Rochester, NY. Together they raised their two children, Ronald and Sandy. For many years the family resided in Henrietta. She was employed at the Highland Hospital in the purchasing department. Years later, whenever she was hospitalized there, she never failed to mention to her caregivers about her years working there.

Ethyl was one of the earliest members of St. Peter’s Episcopal Church, beginning her affiliation while the church was still a mission in 1964. Ethyl not only attended church, but participated in many volunteer and mission activities. She volunteered at the Episcopal Church Home for many years, along with her daughter Sandy. She helped serve dinners to families at the Ronald Mac Donald House. Whenever, there was an event at St. Peter’s, Ethyl was there to offer help in whatever way she could. For many years her hands diligently folded bulletins for the congregation’s use each Sunday. She was a regular, active participant of Adult Bible studies. At one of the meetings when discussing gratefulness, Ethyl identified Sandy as the person she was most grateful for. While she was ready to do things, always with a smile, she seemed to prefer being in the background. Sometime after Bob, her husband, died, Ethyl decided she wanted to be a lector. Even though she was nervous about taking on this task, she did it boldly, stopping only when it became too difficult for her to navigate the riser to the pulpit. Later on, she became a member of Daughters of the King. While living at home, she was a regular participant at their meetings and church based activities.

Just over a year ago, it became necessary for Ethyl to move to a supportive living facility, as she needed more care than could be provided in her home. She quickly adjusted to living there, becoming a favorite resident among the staff. She very much counted on her visits and daily telephone calls from Sandy. She loved having visitors and the daily contacts with the staff. The favorite part of her meals was dessert, which she eagerly consumed, often before the rest of the meal.

Last February, the congregation of St. Peter’s celebrated Ethyl on her 100th birthday. She was invited to, and eagerly participated in the planning of the music for that service. What a celebration of music and worship, proclamations from the governor and town supervisor, and meeting with old friends. She was truly a queen, complete with a tiara. Everyone had an opportunity to share a meal with her that day.

It was difficult for her when the coronavirus pandemic began, as it resulted in her not being able to have visitors or attend church. She was, nevertheless, ready to engage in telephone contacts, wanting to know how others were doing, and often questioning our status in hiring a minister.

On Monday, January 18th, Ethyl passed away peacefully in her sleep. She was a gentle, loving person, dying in the manner in which she lived. We will miss her beautiful smile. May she rest in peace.