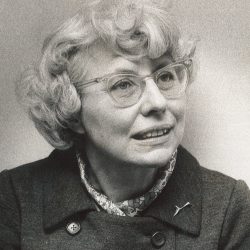 Jean Reitsman France is a specialist on the architectural history of Rochester NY and nearby communities. She is particularly known for her early work on the Rochester architects Harvey Ellis and Claude Bragdon. She is a well-known authority on the Arts and Crafts Movement in America, on Frank Lloyd Wright, and on Louis I. Kahn.

Jean Reitsman France was born August 21, 1923 in Cleveland, Ohio, daughter of Grace Emmett Reitsman and Ralph W. Reitsman.
In 1946, she graduated from Oberlin College with a degree in art history, and continued for a masters degree under art history chair Clarence Ward. In January 1948, she completed her masters and married Robert Rinehart France. They moved to Princeton, where Bob entered graduate school in economics and Jean worked on cataloging excavation material from the Athenian Agora under Homer Thompson at the Institute for Advanced Study. In 1952 their first child, Robert Karl, was born, followed by Virginia Grace in 1955.
After Bob completed his degree, he joined the economics department in Rochester, New York. Jean became involved with the Unitarian Church, and served on the three-person committee that selected Louis Kahn as the architect of their new building. In 1962 Kiki was born.

With the arrival of their third child, a larger house was needed. Jean and Bob decided to build a new house, hiring local architect Jim Cunningham to design it. Cunningham’s design was influenced by Craig Elwood’s Case Study houses in California. At the same time, they built a cottage on Canandaigua Lake, where they enjoyed sailing and swimming. The extended family, now stretching to two great granddaughters, still gathers there every summer.

Jean’s involvement with the local preservation community began as soon as she moved to Rochester. She has been involved with the Landmark Society of Western New York as trustee, officer, and committee chair from 1964 until the present day. Her work as a preservationist includes service as consultant or member of the preservation boards of the City of Rochester (1972-1980), the Town of Perinton (1987-2004), and the Town of Pittsford (1990-present). She was a founding member and trustee of Historic Pittsford from 1970 to 2014.

She completed the first historic preservation inventory for the town of Pittsford in 1980, evaluating and documenting the historic significance of more than a hundred structures. She has served as architectural history consultant on numerous local projects, the most prominent of which was the Cosentino/Parker restoration of Frank Lloyd Wright’s Boynton House in 2010-2012, the subject of a WXXI documentary.

Jean has worked with the University of Rochester’s Memorial Art Gallery for many years. She organized a series of architectural lectures called “The Art We Live In” over more than a decade beginning in 1974. She acted as curator or coordinator of exhibits for several shows, including two on Rochester in general, Rochester Reflections (local architecture, 1971), and Made in Rochester, 1830-1930 (1974). Of particular note are two exhibits which showcased local architects, Harvey Ellis: Artist, Architect in 1972 and Claude Bragdon, A Pre-Modern Architect in 1985.

Jean taught for many years at the University of Rochester, including courses on American architecture and Frank Lloyd Wright and a seminar on historic preservation. Her teaching career spanned 1974 to 2002, when she retired at the age of 79. Many of her tens of thousands of teaching slides have been digitized for the collection of the Society of Architectural Historians.
In a wider arena, Jean is an avid member of the Society of Architectural Historians, in which she has been active since 1948. She acted as a member of the national board of trustees from 1984 to 1987, and as Harley McKee Chapter president from 1982-1988. Her definitive collection of material from early SAH tours has been transferred to their archives. She was made a Fellow of the Society in 2010.
Jean has been photographing and documenting architecture since the late 1940’s. For her thesis work, she and Bob drove through small towns in Ohio to photograph early churches in the Western Reserve. Her photographs of notable buildings in the Rochester area have been invaluable to later local historians and conservators. On SAH tours, she was able to view and photograph buildings of architectural significance all over the country. Even family trips to Europe were often designed around little-photographed sites, with the children included to provide scale. Architecture is perishable, and buildings change. Her slides captured a great deal that was subsequently lost.
Jean has also served as a panelist on the Architecture, Planning and Design committee of the New York State Council on the Arts from 1983 to 1986. She is a member of the Preservation League for New York State, the National Trust for Historic Preservation, the Frank Lloyd Wright Foundation, and the Arts & Crafts Society of Central New York.

Jean is the recipient of many honors. She was made a Fellow of the Rochester Museum and Science Center in 1974. The Rochester Chapter of the American Institute of Architects made her an Honorary Associate in 1981 and the AIA of New York State made her an Honorary Member in 2014. She is the recipient of the President’s Award from the Landmark Society of Western New York (1987). She was made a Fellow of the Society of Architectural Historians in 2010.

When she retired from the Pittsford Design Review and Historic Preservation Board in 2017, the Town Board passed a Resolution of Commendation, recognizing “her professional expertise, her wisdom, her deep commitment, her years of service and above all her matchless aesthetic sense.”

Of Town and the River, A Rochester Guide (with Betsy Brayer) – 1977