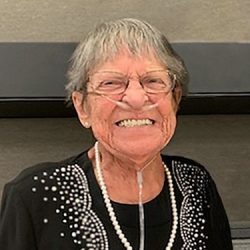 Alice L. Lewis passed peacefully on February 2, 2021. She was born November 20, 1938 in the Chicago suburb of Evergreen Park, Illinois to George and Ruth Friebel, who both preceded her in death. Alice was a sister to Geraldine (Wes) Guthals, John Edward Friebel, George (Eldora) Friebel, Margaret Bickerton, Ruth (Richard) Smith, and Robert Friebel, and brother-in-law George Vanderwall and sister-in-law Jayne Stork. She is pre-deceased by her husband Arnold Lewis, her sisters-in-law: Margaret Walsh, Nancy Vanderwall, and Betty Friebel; her brothers-in-law: Claire Cameron, and John Bickerton, and nephew Ben Stork.

Alice attended Blue Island High School, where she met the love of her life Arnold Lewis, when they were both in the high school band together. They were married nearly 60 years when Arnold passed in 2018. Together they raised 6 children: James (Kathy), John (Sue), Deborah (Rod) Davis, Robert (Victoria), David (Rowena), and Timothy (Heather). Alice was known as Grandma Crinkles, Motorcycle Grandma, Grandma Pink hat, Grandma Camper, or Grandma Alice to the 12 grandchildren she welcomed as her own whether through birth or marriage. She also had many nieces, nephews, and great-grandchildren. Alice and Arnie started their married life in Blue Island, IL, and later moved to Carpentersville, IL, and then finally settled in Henrietta, NY where for the last 50 years they were active contributors to the community. They could also be found quite often in the 1000 Islands area during their summers.

Alice thrived at supporting others with her abundant energy. She spent her life loving her family, whether caring for her siblings, her husband, her children, or grandchildren. She was always seeking ways to help others. While at her husband’s side she supported the community of Henrietta. She could often be found helping Cub Scout Pack 481 and Boy Scout Troop 481 at Winslow Elementary School, and the Henrietta Volunteer Ambulance where she would make cravats, assist with garage sales, and occasionally play “victim” to be trained on by the students learning first aid. She was well known among those who lived in her neighborhood; lending a hand to her neighbors whenever she could, and being a watchful part of the village that raised the neighborhood children.

Alice was a great cook and baker, she loved to read, loved her coffee, enjoyed gardening, puzzles, bowling, camping, crafting, and sewing. One of her favorite activities was bargain hunting – at thrift stores, garage sales, and anywhere that accepted coupons.

In 2006 Alice was given two weeks to live, and at one point doctors weren’t sure she would make it through the night. But, they didn’t know Alice; she wasn’t going until she was ready to go. She went on to live an additional 15 years after being put on life-saving medication, while under the care of Doctors Jim White and Stephen Judge. Those years were filled with the lows of caring for her husband during his fight with cancer, and the highs being able to see her grandchildren become young adults; seeing many of them get married and have children of their own, bringing her great-grandchildren into the world. She spent those 15 years enjoying her family’s celebrations, attending events, and continuing to play her favorite game of Rummikub.

Alice may have been small in physical stature, but her strength to persevere, and her grit, will, and determination to survive, while living out a life of love and service to others will serve as an example to her children and their spouses, her grandchildren, and to many others that knew her throughout her life.

Alice’s Service will be broadcast live Saturday February 20th beginning at 3 PM. CLICK HERE TO VIEW LIVESTREAM. A digital copy of the service bulletin is available by CLICKING HERE