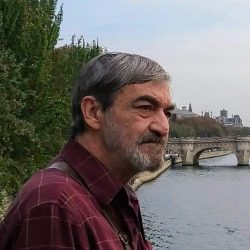 Charles Shaw, a native of Cuba who has lived in Brighton since the 1990s, died Tuesday (February 23, 2021) after a long illness.

He was born in Havana, Cuba on May 23, 1951, the son of Leonard Shaw, a U.S. merchant marine sailor, and his wife María Céspedes.  He attended elementary and high schools in Havana, and graduated in 1951 from the Polytechnic University José Antonio Echevarría with a degree in industrial engineering.  Following graduation he worked as an industrial development planner in Havana.

He was married on July 21, 1979 to Hortensia (“Tensi”) de Leon Herrero, also an industrial engineer.  Their son Daryl was born in 1989.   A couple of years later they decided to leave Cuba, which was plagued with shortages and other economic problems at the time, and to emigrate to the United States, in order to make a better life for themselves and their son. They settled in the Rochester area where several family members were already living.

After their arrival, Charles worked for five years at the Sentry Group plant in Pittsford, and for almost fifteen years at the United States Postal Service facility on Jefferson Road in Henrietta.  He retired in 2013 and devoted his life to his family and to pastimes including euchre, chess, puzzles, movies and travel.

Although he lived thirty years in the United States, he never lost his fondness for Cuban rum, coffee, music and beaches.  He and his wife returned to Cuba several times to visit relatives, and they also enjoyed making trips to Europe, Las Vegas, and Caribbean resorts.

Because of the COVID-19 pandemic, there will not be any visiting hours or services at this time.