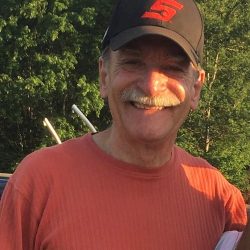 Vincent (Vinnie) N. Ross, Jr. age 64, passed away on Monday, March 29th in Rochester, NY while surrounded by his family. Vinnie was diagnosed with stage 4 lung cancer in February.

Vinnie was born in Syracuse on October 13, 1956 to the late Vincent N. Ross Sr. and Jenny (Procopio) Ross, and went on to graduate from West Hill High School before joining the Air Force. After he was honorably discharged he worked with his father at the Fenton House Bar and Restaurant. He met and married Virginia Craven and they would go on to raise five children. In 1978 he bought and ran the Hitching Post Bar. In 1981 he established his own auto repair shop VNR Sales and continued with it until his passing.

Vinnie enjoyed playing pool and was on the Lewis County Billiard League since the late 70’s. He was Vice President of the league for many years. He also enjoyed the demolition derby and was part of the original “Watson Boys” team in the late 70’s early 80’s. He participated in motocross racing in his early years and was a longtime member of the #4 fish and game club. He enjoyed spending time with his family and friends, whether it be painting derby cars at the last minute or spending the day boating, water skiing and swimming down at Beaver Lake. He loved spending time with his grandchildren more than anything. He will be missed by many.

There will be a celebration of life held for him in the spring.