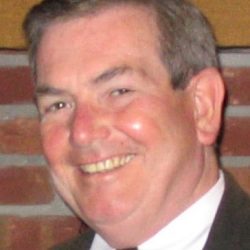 Philip is survived by his beloved wife, Judy (née Turner); his children, Phil (Michele), Joe (Diana), Elizabeth, and Jonathan; by his grandchildren Jordan (fiancé Makenzie), Emily, Rhett, and Lauren; his brother, Larry (Rebecca); and devoted nieces and nephews. He is predeceased by his parents, Bill and Rita, and his sister, Elaine.

Phil was born in Rochester, NY on January 9, 1942. He graduated with an accounting degree from St John Fisher College in 1964 and became a CPA. During his career he worked at Price Waterhouse, Hickory Farms, owned a business with his brother, and served as CFO at Brinkman International Group until his retirement in 2005. In his retirement he enjoyed trail riding with his horse, traveled as a volunteer with church groups, participated in political campaigns and rallies, and designed and built a world-class horse stable.

A devoted father and husband, he loved spending time with family and friends. A life-long lover of road trips, he traveled far and wide in the United States and Canada. He was passionate spiritually and philosophically, and forged his path as a devout Catholic and political progressive. Caring for people and being honorable in thought and in deed were to him the highest virtues, which he modeled during his life.

In 1977 Phil and Judy moved their family to Rush. “The Farm”, in addition to the summer cottage on Silver Lake, were realizations of dreams, shaped his joy and have left enduring memories of joy for the family. Between the two, he taught his children how to work and play; how to live. The farm was and remains a beloved gathering spot for the extended family and friends as well as the seat of over four decades of large Thanksgivings and family celebrations. In retirement, Phil built a state-of-the-art stable there as he spent more time as a horseman, as his young grandchildren explored the farm as a new generation.

Successful in his career and on several boards he was also active in his church and parish; in volunteer groups, and most of all in his family. He cultivated an appreciation of honest work and earned pleasure in the company of loved ones, including beloved pets. He remains cherished and is sorely missed by the many whose lives he touched, shaped and improved.

Family and friends are invited to call on Friday, June 11th from 4-7 PM at Miller Funeral and Cremation Services, Inc, 3325 Winton Road South. Due to COVID-19 Restrictions on capacity, please register for a time spot for calling hours by Clicking HERE.

Donations in his memory may be sent to the Open Door Mission in Rochester, Rochester Food Bank, the Salvation Army of Rochester, Habitat for Humanity, or other local services to help those in need.