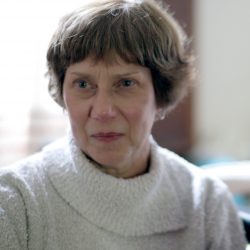 Kathlyn M. Herzog peacefully passed away September 13th at the age of 75. Though vascular dementia had diminished her abilities, she never lost her humor, her love of music, or her gentle, affectionate personality. She was attended in her final hours by her daughter, Amy Herzog, and her husband of 51 years, Bob Herzog.

Kathy was born Kathlyn Mary Mihal in Binghamton, NY on July 4, 1945. Her father, William Mihal, died of a heart attack when she was two years old. Her mother, Mary Jane Mihal, raised Kathy and her brother Bill with enormous love and resilience, supported by their extended family. Kathy received her undergraduate degree at SUNY Cortland, where she asked a graduate student, Robert Herzog, for a ride home. They married on August 9th, 1969, and moved to Rochester, where she received a Master’s degree in education at SUNY Brockport. They raised two daughters, Amy and Elise, in their home in Victor, where Kathy spent nearly fifty years gardening, cooking, reading, and walking in the woods.

A life-long educator, Kathy taught at numerous institutions in the Rochester area, including over twenty years as a third-grade teacher at Lyons Elementary School. She loved good food, and could find the best hole-in-the-wall restaurants in the most remote locations, long before smart phones. She grew up studying her Uncle Joe’s jazz and blues record collection, and music was always playing in her kitchen. While she was often quiet, and sometimes shy, her wit and timing were impeccable. No one could deliver a comeback, or a side-eye, like Kathy.

Kathy is predeceased by her parents, William and Mary Mihal, her brother, William L. Mihal, and her nephew, David Mihal. In addition to her husband Bob and daughter Amy, Kathlyn is survived by Amy’s spouse Tara Mateik and their daughter Helen Herzog Walsh; daughter Elise Burke and her children Robert and Jasleen Burke; sisters-in-law Lou Ann Mihal and Margaret Carino; brother-in-law Hal Herzog and his wife Marge; and many nieces and nephews and their families: Marianne and Dan Isaacs, Joan Bickford, Andrea and David Peterson, John Herzog and Don Connelly, Peggy Ann Maywalt, Billy Affeldt, Marty and Jeff Broad, and Karin and Malcolm Smith.

Kathy was a gardener and wildflower enthusiast, but in lieu of sending flowers, please plant something green in her memory. She was devoted to children in need, and to the fight for social justice. Boys’ Town was one of her favorite charities, and we have established a memorial campaign with the Southern Poverty Law Center, an organization she championed throughout her life: https://splc.donordrive.com/campaign/Kathlyn-Herzog-Memorial.

“My head pillowed on waves –
I drift with the flow –
Broad river,
Deep sky.
They float, they sink,
Like bubbles,
Like wings”
Thich Nhat Hanh