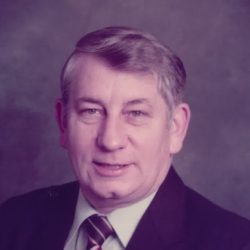 Bob finished high school in Harrison, NY and joined the Navy during the Korean War. He then met and married Maryanna, and completed his toolmaker apprenticeship at General Electric in Schenectady, NY. Next he pursued his mechanical engineering degree at Rensselaer Polytechnic Institute in Troy, NY. Upon graduating, he worked for the Trane Company in Scranton, PA until an offer from Eastman Kodak took the family to Rochester, NY. As an Industrial Engineer at Eastman Kodak, he worked on many film manufacturing processes as well as development of Kodak copiers.

He and Maryanna fostered a love and respect of the natural world for their children, a gift that we continue to share. Family vacations took place in camp grounds near and far; Assateague Island, Virginia, Gettysburg, Algonquin Park in Canada; Acadia National Park in Maine; as well as many parts of the Adirondacks. He enjoyed fishing, tying his own flies, woodworking and anything with family. Kelly’s Camp in Boonville was a favorite destination to enjoy the outdoors, fish, and play some poker with good friends. He and Maryanna took many trips to see our country, and especially enjoyed Isle Royal, Banff and Jasper, Vancouver Island and Mount Saint Helens.

Retirement took them back to their beloved Adirondack mountains where he designed the home they lived in for over 20 years. He continued his professional engineering by designing septic systems for homes in the Adirondacks. Bob was an active member of the Great Sacadanga Lake Fisheries Federation for many years.

Their final years were spent back in Rochester, closer to family.
Services will be private at a later date.
Memorials can be made to Great Sacandaga Lake Fisheries Federation, GSLFF, PO Box 991, Northville, NY 12134.