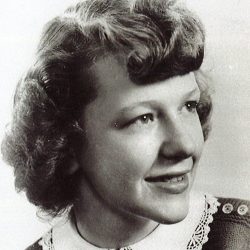 A long and loving life for Joyce L. Andrews ended on July 10, 2021 at the age of 90.  She was the quintessential mom, right down to the homemade chocolate chip cookies.

Married for 45 years to Robert  (“Bob”) L. Andrews until his passing in 1996, she remained dedicated to her family.  She took on the care of all who needed her–later in life, her grandmother, mother, sister, and husband–unflinchingly and with love.

Once her children were in high school, she returned to working outside the home, spending more than 20 years at Rochester Community Savings Bank, before taking a well-deserved retirement.

Even then she wasn’t done serving her community.  She spent many years volunteering for the AARP Tax-Aide program, persevering through the demanding annual training required (though perhaps grumbling once or twice about it).  Though she spent “more than enough” time in hospitals with Bob over many years, she returned to volunteer in the Park Ridge/Unity Hospital gift shop.  She began to knit again and made literally hundreds of tiny hats for the premature babies born at the hospital and elsewhere.

Joyce loved music.  She and Bob first got together when he asked her if she’d like to come over and listen to classical music.  Her response:  Sure…when?  No nonsense that girl.  She played piano and organ at home and later in life sang with her sister Janet’s group, the Silver Shores Singers, in Key Largo, Florida.  She enjoyed Patsy Cline and the ragtime of Scott Joplin.

One last story she liked to tell on herself:  Once, Joyce was trying to refer to a certain singer/actress but couldn’t quite come up with her name.  “You know, Julie whatshername.”  This went on for a while until suddenly, “Oh!  Julie Andrews!”

Godspeed and rest in peace, Mom.

Donations may be made in her memory to Glenmere Assisted Living, Pittsford, NY; or WXXI.