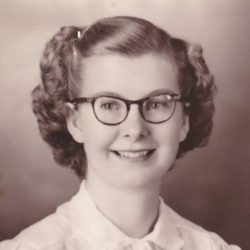 Mary Jane Schmitt (formerly Mary Jane Schmidt, nee Marshall) passed away Sunday, August 8th at the Episcopal Church Home after a lengthy battle with dementia. She was raised in Carrollton, Ohio and went by Jane her entire life. She received her undergraduate degree from Hiram College and a masters degree in Chemistry from Case Western University. Jane was retired from the NY State Department of Environmental Conservation. She was an active member for many years of the League of Women Voters. She enjoyed creating hooked rugs and was a member of the rug hookers guild of Rochester. Jane was predeceased earlier in the week by her husband of 30 years, John Schmitt. She is survived by her daughters Kelly Vicente (Tom) and Jenny Schmidt (Steven), stepsons Peter Schmitt (Ana), Edward Schmitt (Mary Alice) and stepdaughter Mary Younge, 14 grandchildren, 14 (soon to be 15) great grandchildren, her twin sister, Anne Finnicum, niece, Polly Jones (Dave) and nephew Richard Finnicum (Barbara). Interment is planned at her familial cemetery in Carrollton, OH. Memorial donations may be made to the Alzheimer’s Foundation of America (WEBSITE).