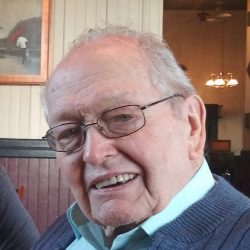 Ernest William Lang, 94, of Stafford, entered into rest Friday, August 13, 2021, after a brief illness at UR Strong Memorial Hospital in Rochester, NY.

Ernest Lang was born March 20, 1927 in Batavia, the son of the late Georg and Anna (Gauger) Lang. Ernest graduated in 1945 from Batavia High School and was drafted into the U.S. Army just a few weeks later. He served his country honorably during World War II from July of 1945 to January 1947 as a military policeman stationed in France.

Following his discharge, Ernest went on to become a machinist employed by Graham Manufacturing Co. and retired in April of 1991 after 44 years of loyal service.

“Ernie” met the love of his life, Shirley (Acheson) Lang, at Batavia High when she happened to round the corner in a stairwell and he saw “the most beautiful smile he had ever seen”. The high school sweethearts were married June 28, 1953 and resided in Stafford making a life together for nearly 62 years until Shirley’s death on May 31, 2015. Ernie was her devoted caregiver and did so without complaint for the last 8 years of her life.

He was a faithful lifelong member of the New Apostolic Church of Batavia and later, Rochester. He and his wife raised their 3 children in that faith as well. He always made time for his children, whether it was playing baseball, swimming, or camping in the summer or ice skating and sled riding in the winter. Each year he planned family vacations that took them to different interesting and historical locations and wonderful memories were made.

Ernie was the very definition of a good human being, embodying a moral ideal that we should all strive toward. He wasn’t a man of many words, but more importantly, he was loved and respected for his honest, kind, easygoing and ever patient nature.

The family would like to express their thanks to Jill Hart, CNA for all her help in the past months with Dad’s care, which was much appreciated.

Family and friends are invited to call on Saturday August 21, 2021 from 9-10 AM at the New Apostolic Church 750 Marshall Road Rochester NY 14624, Funeral Services with Military Honors will follow at 10:30 AM, Evangelist Michael Wurst will officiate. Interment will be held privately in the Grandview Cemetery, Batavia, NY. Flowers are gratefully declined. Those wishing to make memorial contributions may do so to the Batavia VA Medical Center, 222 Richmond Avenue, Batavia, NY 14020.