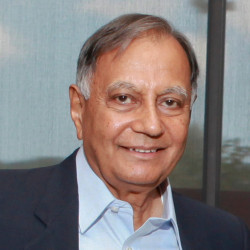 Dr. Yegnaswami Raghunathan, 87, passed away on August 23, 2021 at Strong Memorial Hospital in Rochester, New York, due to complications from a spinal injury sustained on July 18. He is survived by his loving wife of nearly sixty years, Sita Raghunathan, along with his daughter Pratima Raghunathan, son Vijay Iyer, daughter-in-law Christina Leslie, and granddaughter Jayanti Leslie-Iyer.

A brief Anthima Samskaar / end-of-life service will be held on August 24th at 10:00am ET, followed by a Celebration of Life on September 12, 2021. The Video of the Funeral Service can be viewed below.

Raghu was born September 14, 1933, in Talegaon, Maharashtra, India to Gomathi and M. Yegnaswami. His father, a government auditor, was stationed for multiple short stints in cities and towns around the Indian subcontinent before Independence and Partition. The fourth of eight children, Raghu weathered these frequent upheavals surrounded by cherished siblings, nieces, and nephews, which instilled in him an abiding love for home, family, and community.

After graduating with undergraduate and master’s degrees from L.M. College of Pharmacy in Ahmedabad, he became chief pharmacist at Lederle Laboratories in Bulsar (Valsad), Gujarat. In 1961 he married Sita Lakshmi Venkatesh. He immigrated to the U.S. to attend graduate school in the College of Pharmacy at the University of Florida, Gainesville in 1964. Sita joined him a year later, and their daughter Pratima was born in 1968. After Raghu earned his PhD, the family moved to Albany, New York, where he worked as a research scientist for Sterling Drug; their son Vijay was born there in 1971. In 1974 the family moved to Rochester, where Raghu worked as senior principal investigator at Pennwalt Corporation. Among his accomplishments at Pennwalt (later known as Fisons), he invented and patented an award-winning polymer-coating technology for the controlled release of medicines into the body, called the Pennkinetic system, a technique now commonly employed in over-the-counter remedies. Raghu left Fisons in 1993, and continued as a research scientist at Bausch and Lomb before retiring at 62.

Modest, compassionate, and ardently egalitarian, Raghu drew satisfaction from a simple life among family and friends, never allowing professional demands to overshadow his devotion to loved ones. He enjoyed volunteering at the India Community Center of Rochester, for which he co-authored the original charter, emphasizing its secular orientation as a space welcoming to all. He also liked to browse scientific journals, followed current events by reading daily newspapers from the U.S. and India, and nurtured a lifelong fondness for music. He maintained strong ties with his extended family around the world; he took delight in connecting with his nieces, nephews, and younger relatives, who rallied to show their affection after his injury.

The family would like to express their deep gratitude to the many friends and family members who blessed the Raghunathan family with daily kindness, support, and medical counsel during the five weeks of Raghu’s hospitalization. The family would also like to thank the staff at Strong Memorial Hospital’s Emergency, Orthopaedic Surgery, Intensive Care, Acute Rehabilitation, and Palliative Care units for their outstanding treatment during his final weeks. Lastly, a special thank you to Miller Funeral Home for accommodating us in this difficult time.