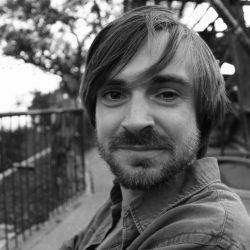 Doug Fuller’s friends likely will remember the day a most unlucky moth navigated perilously into his left ear and remained there, fluttering against Doug’s eardrum, trapping both creatures in an existential limbo. Only an intervention by an emergency room doctor could free the moth and Doug’s ear. It was an event that Doug recounted frequently, and one that highlighted his sense of the comic, the absurd, the tragic, the uncontrollable in life, as he listened to the doomed moth beating against his eardrum. Perhaps more than any other quality, Doug will be remembered as someone who listened — to the rhythms of music and poetry, to the dreams and difficulties of friends and family, to the sounds of suffering in the world.

Doug, a son, brother, grandson, and friend, passed away at the age of 35 on August 27, 2020. He died, as so many others have, during a pandemic that made it difficult for friends and family to gather in celebration of his life. Yet, in the year since his death, Doug has been mourned and remembered by his family and the many communities in which he was a part — his childhood friends from Louisa and the Twin Oaks Community; the musical communities in Richmond and Rochester; and the poets, teachers, and fellow graduate students at Virginia Commonwealth University, many now scattered across the country.

Doug was born on August 22, 1985, in Annapolis, Maryland, the oldest son of Nell Asay Fuller and Steve Fuller. With his brother, Travis, he grew up in Louisa, Virginia, where his nascent musical talents were coaxed from a small acoustic guitar. Summers were spent boating and swimming on Lake Anna, a pastime he would carry into adulthood, floating serenely for hours in the middle of Adirondack lakes. He graduated from Louisa County High School before heading to Richmond, where he worked briefly as a taxi driver and barista while pursuing a career in music. He received his bachelor’s degree in English and later an MFA in Creative Writing from Virginia Commonwealth University.

Doug’s calling was music, and he wrote songs and played guitar and keys in several Richmond bands, among them Ghost Owls, The Kindling Kind, The Welcome Hips, Pete Curry, Saw Black, and Shower Naked. In Rochester, NY, he joined Cantelope, Superty Dupes, and a collaborative project, The Hearts Club, while also recording two records, Losing Maps and Other Songs of Mine, and Ship of Fools and Other People’s Songs. In front of a crowd, Doug transformed into a wild man, tearing up the dance floor with the same energy he spent jamming typewriter keys or playing guitar for hours — and sometimes days. He believed that instruments were meant to be shared, generously lugging them to carpeted dive bars and inviting friends and strangers to play in his home. Predictably, he savored rock’n’roll documentaries and did ironic impressions of John Lennon and Tom Petty. He loved cheap beer and boasted an astonishing collection of cowboy boots, denim jackets, and colorful socks.

From vodka sauce to homemade pizza and pulled pork, Doug cooked enthusiastically, often feeding friends with Grateful Dead vinyl playing in the background. Dinners often stretched into all-night conversations; revelrous nights with spontaneous dance parties animated him, often well into the early morning hours. Yet, he also enjoyed quiet conversations with his mom and their shopping trips to Carytown. Pulling on his beard while playing Crimes Against Humanity or crossword puzzles, Doug considered himself an aficionado of wordplay and puns. A lover of sweet potatoes, he sometimes quipped, “I Yam What I Yam!” and “I Yam Sorry!”

As someone who wished to be present in the moment, he was a very late convert to the smartphone. He will be remembered as someone who treated people, whether strangers or friends, like they mattered. And without judgment.

From Doug’s poem, “This is How We Carry On”:

“This is how we really carry on:/we go to sleep, we wake up/in spring & buy berries & cover them/in yogurt & honey, we drink coffee all day to keep our heads/above water, we lay in the grass in the sun remembering/who we were & who we could be.