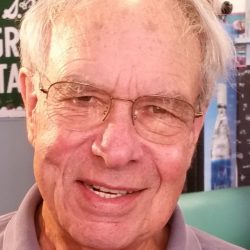 Steve was born in Philadelphia in January, 1943, the elder son of the late Anne and Paul Biklen and grew up in Westport, CT. He was a graduate of Phillips Academy, Andover, Brown University, and the Wharton School of the University of Pennsylvania.

Steve served as a LTJG in the US Navy, 1966-1969 on the destroyer Henry W. Tucker, home ported in Yokosuka, Japan.

After the Navy, he worked at Coopers & Lybrand in NYC before joining Citibank in 1973. He transferred to Rochester, NY in 1978 as VP of Finance for Citibank NYS and became manager of the Citibank Student Loan Business in 1980, ultimately overseeing its conversion to the publicly owned Student Loan Corporation in 1992. Retired as CEO of the SLC in 1998.

Steve and Britta married in 1989 and spent the years from then until now living in the Rochester area, always with loving pets, always taking advantage of the many outdoor and cultural activities available, and often traveling to different spots around the US and around the world, but always spending a week in the Adirondacks, primarily Lake Placid, every summer. Most importantly, they spent many enjoyable times in Vermont and Savannah with Ted and Rob and their families.

After retiring, Steve served on the Board of the Massachusetts-based American Student Assistance and volunteered for Meals on Wheels He also volunteered for Lifespan, which included assisting clients with their financial matters.

To honor Steve’s wishes, there will be no calling hours or funeral service. His wish was to be remembered without ceremony by those who knew and cared about him in whatever way they find comfort. The family will hold private Memorial gatherings at a later time. Contributions in his memory may be made to Wilmot Cancer Institute (WEBSITE), Sunset House Hospice (WEBSITE), Doctors Without Borders (WEBSITE), or Lollipop Farm (WEBSITE).