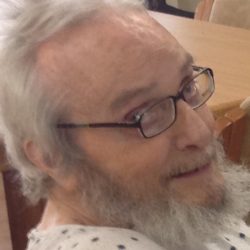 Gary overcame lifelong health issues and physical limitations that would have sidetracked anyone not possessed of his tenacity and spirit. He was quickwitted, inquisitive and had a wry sense of humor. He was most proud of his career in security and enjoyed regaling friends with stories about his exploits. He was devoted to his late wife, his Roman Catholic faith, true crime programs, the Detroit sports teams and the Celtic Woman ensemble.

Gary was a longtime resident of Fairport Baptist Home and his family would like to acknowledge the love and tremendous care provided the FBH staff. It is not an exaggeration to say that he valued his FBH caregivers as friends and family.

A Memorial Service in remembrance of Gary Cook will be held on what would have been his 79th Birthday,  November 3, 2021 at 10 o’clock A.M. in the chapel at Church of the Assumption, 20 East Avenue, Fairport, New York 14450.