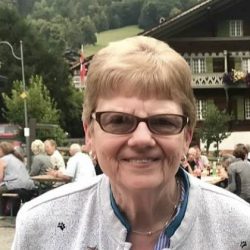 Evelyn grew up on a farm in Portland, NY and was Valedictorian of her class. She received her Education degree from the University of Brockport.

Evelyn loved music from an early age, playing many instruments, including the Clarinet, Contra Bass Clarinet, Piano and Organ. She was an organist for more than 50 years, playing at several area churches. She also participated in various choral groups, including the Liederkranz, where she accompanied the German mens’ singing group on piano. One of her most memorable musical experiences was playing the organ at the Eastman House for her coworkers.

She also enjoyed crafting and sewing and even taught classes. Some of her Halloween costumes were neighborhood hits.

When her children were grown, Evelyn began working in the Financial Services industry. She passed her Series 7 and worked most recently as a Senior Client Services Manager.

In her later years, Evelyn enjoyed the company of her cats, visiting friends and family, reading, the Game Show Network, attending plays and musicals, traveling and an occasional trip to the casino for fun. We’ll miss her wise cracks and remember all the smiles she gave us.

Family and friends are invited to call on Saturday, October 16th from 3-5 PM with a prayer service to follow at 5PM at Miller Funeral and Cremation Services of Victor, 301 West Main Street, Victor. Evelyn will be laid to rest with her daughter Kathryn in the Parma Corners Cemetery in a private ceremony. In lieu of flowers, contributions may be made to Serenity House,1278 Brace Road, Victor, NY 14564 Donate Online