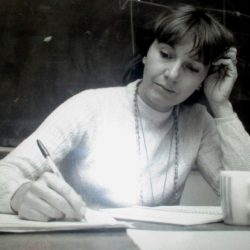 Carol had a brilliant mind, attending the University of Michigan, Wayne State University, the London School of Economics and the Warner School of Education at the University of Rochester. When her children were older, Carol embarked on a career as a math teacher, first at Mercy High School, later at Pittsford Mendon High School and then at Monroe Community College.

A lifetime liberal, Carol was dedicated to progressive causes, and in her retirement took a particular interest in addressing unfair labor practices in third world countries, serving on the Board and volunteering regularly for One World Goods in Pittsford Plaza. Carol helped Vietnamese refugees improve their English. An avid reader, she enjoyed repairing damaged books as a volunteer for the Brighton Memorial Library.

Carol was an anchor for her group of close friends as she and Eugene hosted regular Sunday night dinners at her house.  She always set the table beautifully with her mother’s fine china and the nights were filled with great conversations and laughter, and also ended with a delicious dessert and cups of coffee all around.  Whenever her daughter and granddaughter visited from California, they loved being the special guests at Sunday night dinner.

Carol was a loyal reader of and photographer for her son David’s online magazine, Talker of the Town, which sometimes featured pictures of Carol participating in local events or whacky stunts.

No services are planned at this time.