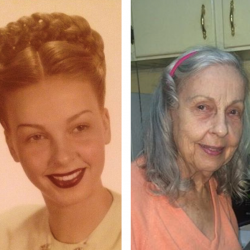 Delphia Mavis (Curry) Brady, beloved mother, grandmother, great-grandmother, and great-great-grandmother,
died of natural causes peacefully in her sleep early in the morning on the 20th of November, 2021. She was
exactly 94 years and 7 months old. She lived in Brighton for over 50 years before living at Elderwood of
Lakeside at Brockport for the last few years.
She was preceded in death by two husbands, Lewis “Trent” Newland (died 1949) and James “Jim” Brady (died
1969), and her three siblings Alma, Lucille and Willie Ray. She leaves behind five children, Dolores (Newland)
Dunlap, Debra Brady, John Brady, Pamela (Brady) Parsons, and Mary (Brady) Cooley, as well as thirteen
grandchildren, eighteen great-grandchildren, and six great-great-grandchildren. She was a devoted mother,
supporting her children as much as she could from Girl Scouts to helping them establish their own homes and
families.
Delphia was born and grew up near Pine View, Tennessee on April 20, 1927. She left home at 16 to live with
her aunt and uncle in Pontiac, Michigan, where she worked for Bell Telephone and helped support the war
effort. She met her first husband, Trent, after moving back to Nashville. They moved to California and had
Dolores before he was tragically killed in a small airplane accident. She met her second husband, Jim, and
had two more children, Debi and John, while in California. After they moved to Albuquerque, New Mexico,
where Pam and Mary were born.
In 1967, she and her family moved to Rochester, New York. Jim worked at Eastman Kodak’s main office. Jim
passed away two years later and Delphia managed somehow to keep the house and raise her children by
herself. Delphia went back to school and graduated from Monroe Community College with honors. She drove
her children to Tennessee and California on summer vacations to keep them connected to her family in
Tennessee and their father’s family and their sister, Dolores’ family, both in California. She worked in the
Pittsford Plaza Wegmans from 1981 to 1996 before fully retiring at age 69. She was a member of Atonement Lutheran Church in Brighton, New York, starting in 1968. Over the years, she volunteered for many things
including the Red Cross drive and leading two bridge groups. She taught her children to be strong in the face
of adversity and to keep smiling. She was smiling until the end.
Delphia will be cremated and laid to rest in White Haven Memorial Park, Pittsford, New York. There will be no
service at this time. A Celebration of Her Life will be planned for family and close friends in 2022.
If you would like to make a donation in Delphia’s memory, please support her granddaughter, Rachel who is battling Cancer. GO FUNDME