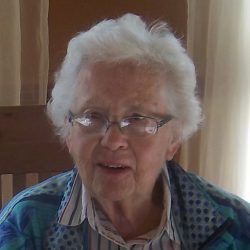 Jane Whitmore – Jane Durdan Logan was born December 16, 1927 in Lindsay, Ontario, to Dr. Hugh Logan and Phyllis Petrie, the oldest of five: Ann, David, Ian and Alexander (surviving). During WWII she was an Ontario Farmerette – young women who worked on farms with men off fighting. Following graduation from the University of Toronto in 1949, she attended the Parsons School of Design in NYC where she met John Taylor Whitmore who was at Columbia under the GI Bill. After Jane taught school in Little Britain, Ontario for a year, they married August 23, 1952 in Bobcaygeon, Ontario. This began a 67 year career in family and home making at 272 Pine Street in Lockport, while John taught English at Lockport Senior High School. Family grew with the birth of Ian, Amy, Andrew, Phyllis and Scott. Her winters were taken up with the John Pound PTA, bridge clubs, Junior Service League, Mother’s Club and duplicate bridge, while summers were spent canning and at the Bobcaygeon cottage. From the time their nest emptied, she cared for John who battled cancer while serving as a Lockport Alderman until his death in 1989. Widowhood saw more community involvement – maintaining city flowers, the Kenan Arts Council and Board, the City Bed Tax Committee (tourism), the Canal Museum – that culminated in her receiving Lockport’s 2008 Key to the Locks Award. It was also a time of active grandmotherly involvement, including singing her ditties with the piano, operating “Grammy’s Hotel” for all her grandchildren and their friends at Camp Kenan, and running Whitmore Family Vacations for her children and grandchildren. In 2019 she moved to the Lockport Presbyterian Home where she received superlative care. This much loved wife, mother and grandmother who always put family first died December 11, 2021, marveling to the end at how old she had become. She is survived by her children, grandchildren: Sarah, Seth (spouse, Sarah Haliburton), and Hannah (Ian and Susan Haig), Jocelyn and John Sherwood (Amy and the late Fielding), Emma (spouse, Chase Doran) and Michael (Andrew and Donna Savino) and Paul, William and Benjamin Tessier (Phyllis and Paul), and great-grandchildren: Logan and Cole Homuth (Sarah and David), and Jacob (John and Katherine Patry); nephew Hulburt Clement Whitmore III, his wife Sandy and their children Christopher, Jaclyn and Bridget and great nieces Kathy Duhow and Pamela Moreland.