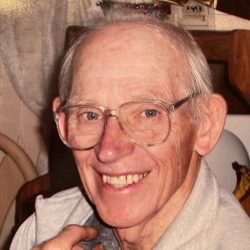 Daniel David Gill, age 95, affectionately known as “Boppa” by many who loved him, entered into eternal life through the grace of Jesus Christ on January 6, 2022. The fifth of six children born on September 30, 1926, Daniel was proud to be raised on Leader Street in Rochester, NY. Daniel enlisted in the Civil Air Patrol in 1943 (First Lieutenant) and graduated early from Edison Tech High School to enlist in the Army Air Corp as an Airplane Maintenance Technician (Sargeant) until 1946. He served with the 83rd Fighter Squadron 78th Fighter Group in Germany and France. Following his time in the service Daniel had a long career as a machinist/engineer for Taylor Instruments and later for ABB. Daniel enjoyed engaging in conversation with anyone who would listen to his stories of his time in the service.  He was proud of having received his private pilot’s license at age 16 alongside his 17 year old sister Alice. They used to fly over their mother’s house and she was known to say: “Those crazy kids!”   In later years, even as dementia stole some of his memories, he would announce to anyone and everyone: “I used to fly, you know”, sometimes confusing his work as a mechanic with the flying he did for fun, but it always produced great conversations among those he found to chat with. Daniel was also an accomplished bowler and avid sportsman. His greatest joy and pastime in later years was making memories with his precious grandchildren. Daniel is survived by his wife Renate Gill, his children Stephan, Kirsten, Vanessa, Dale, David and beloved grandchildren Krista, Bryan, Matthew, Jordan, Heather, Darren, Jessica, Jennifer, Andrew, Kyla and Kelsie along with many other relatives and friends. The immediate family will join in remembrance of Boppa, including a final salute rendered by the United States Air Force, in a private gathering. He will be interred at a national cemetery at a future date. Expressions of condolence would be welcome. Address to:  Renate Gill 64 Ledgewood Drive Rochester, NY 14615. Memorial Contributions can be sent to the National Warplane Museum in Geneseo, NY.