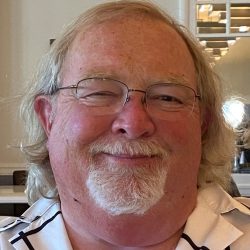 Richard C. “Rich” Engelbrecht of Conesus Lake, passed away while surrounded by his loving family on Saturday, January 15 2022.

He is survived by his beloved wife of 42 years, Linda; children, Jeffrey (Katelyn) and Scott (Meaghan); grandchildren: Owen, George, Andrew, and Henry; parents, Richard A. and Joann; siblings, Lynne (Tom) Irwin and Timothy (Marla); as well as many nieces, nephews and ‘adopted’ children.

If there is one word that embodies Rich it is: family. The amount of love he has for his family and friends is second to none. He adored his wife and one true love, together building a world that he was beyond proud of. He raised two sons that could not have asked for a better father. He taught them and guided them in his own unique way, providing the best example of how to live. He did not take his dad duties lightly, as he would regularly take dozens of kids under his wing. From Boy Scout leader, to moral compass, to just being a Dad when you needed one, he provided guidance, a joke and a soundtrack for our lives. Later he became the proudest grandpa one could imagine, a ‘dad without rules’ for his four adoring grandchildren.

Rich’s passion was photography, specializing in nature and wildlife. He combined this with his love of the outdoors, fishing, hunting, traveling, and boating. He was a member of the Niagara Frontier Regional Camera Club (NFRCC) and the Conesus Lake Association, as well as the Vice President of the Genesee Valley Photography Society. He worked at Kodak for 35+ years, creating their original website, later founding his own business, Mr. E Photography.

In his retirement, Rich was able to fulfill one of his lifelong dreams, becoming a year round resident of Conesus Lake. He could always be found at the end of the dock with a fishing pole and his faithful companion Kooper.

May the Force be with you. Live long and prosper.

In lieu of flowers, donations may be made to the
Conesus Lake Association
Attn Rich Engelbrecht,
PO Box 673 Lakeville, NY 14480.

Per Rich’s request, there will be a celebration of his life party to follow at his home on Conesus Lake this summer.