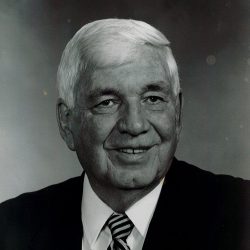 He was a graduate of RIT where he later became Assistant Basketball coach and went on to start RIT’s first golf team. He was initiated into RIT’s Sports Hall of Fame. Bob was also a High School Football official for over 30 years and was inducted into the Section V Football Hall of Fame in 2005.

In 1974, he and Alice purchased Sugar Creek Glen Campground in Dansville, NY where they spent the next 30 eventful years, Bob devoting the bulk of his time to his full time job as Executive Director of the Campground Owners of NY while Alice managed the campground.

He will be greatly missed by his family and his innumerable friends.

Family and friends are invited to call on FRIDAY, February 4, from 4-6PM at Miller Funeral and Cremation Services (3325 Winton Rd S). Bob’s Celebration of Life will be held on SATURDAY, February 5, at 11AM in the chapel of the funeral home. Interment private. In lieu of flowers, donations may be made to The ALS Association or National Multiple Sclerosis Society. To leave an online condolence please visit: www.miller1889.net