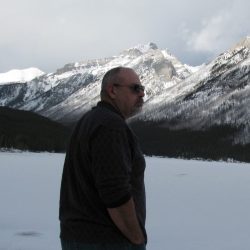 Walter (Wally) was born on January 24th 1955 in Rochester, NY. He was the first child of Shirley and Theodore (Teddy) Dzielski and grew up in Buffalo, NY and Rochester, NY. His sister, Maryanne, and brothers Phillip, TJ, Stanley, Tommy and Stephen, live in Rochester. They have stayed connected and supported each other throughout the years.

Walt met Theresa (Klock) while crashing her girlfriend’s 17th birthday party in 1974. It was love at first sight for him. Their first date was an Amerks hockey game and Theresa later fell for Walt when she realized how much he loved her. She’s never had anyone love her like that. Soon after meeting, she was thinking about traveling and joining the airforce. Walt proposed very shortly thereafter and they married on September 27th, 1975. They honeymooned in Toronto (right after his men’s bowling league night). They’ve been the last on the dance floor at weddings ever since.
When they decided to have a family, they adopted their son Nathaniel (Nate) who arrived from Korea in 1986. About three years later Alexander (Alex) was born and less than two years later Josephine (Jojo) was born. Walt was passionate about his children’s happiness and success and he worked very hard to make sure his family was taken care of. He had numerous jobs throughout his life, most in quality.  His passions were league sports and passing that joy on to his children. He played softball, basketball and bowled weekly for many years and met friends along the way. He also coached and umpired softball.
Walt was proud of all his children’s accomplishments. Nate was his go to for all technical help and assistance. When Nate was a kid, Walt indulged his love of technology every Christmas with the newest Nintendo. He supported Nate’s quest for education and his career pursuits. Nate takes after Walt’s strong sense of will and pragmatic approach to life. Walt was proud of the success of his son Alex, in his pursuit to play professional hockey. He traveled to every game until Alex’s hockey career took him to Alaska, when he would livestream the games at home. Alex shares Walt’s attribute of determination and persistence. They both have the will to just “go and do it”. Walt calls Jojo his bleeding heart. He was proud of her artistic accomplishments, always lent advice for projects she was working on and supported all her quests of personal growth. A big part of Walt’s personality was to be a mentor to others and inspired her to make a career of caring for others. Jojo shares his love of teaching others, lending advice and writing poetry.
Our family grew 6 years ago, when Alex met Hannah and they had a destination wedding in Alaska. The trip of a lifetime! Our whole family flew to Alaska and spent a week exploring the last frontier and getting to know Hannah’s family and friends. If you can believe it, we went on a white water rafting excursion where Walt had to be thrown the line after jumping in the water and then saved Theresa from falling overboard. Last year, Jojo and her partner Carrie bought a house together in the Hudson Valley. The long drive didn’t even faze Walt. He visited monthly to lend advice and help the newbie homeowners with their ever growing list of needed repairs. Walt was very excited for Jojo and Carrie’s upcoming summer wedding and his absence will be felt deeply by all.
After his children moved out, Walt put enormous energy into maintaining and fixing up the house they have lived in for over 30 years. Theresa believes this was to make sure they were taken care of during retirement. With no more projects, they would finally travel to all the places they were never able to visit in their time together. After his death, she has learned about his desire to travel the U.S. with her in an RV and the secret plans made with his daughter to organize a family trip to Hawaii for their 50th wedding anniversary.
Walt will be missed as a husband, a father, a brother, an uncle and a mentor. We feel a deep sadness that he left us too soon. We will hold him close in our hearts until we can meet him again in heaven.