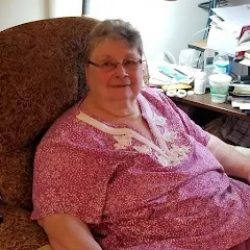 Rosalie attended Western High School (1956) and was a promising soprano in the Peabody Preparatory program. While working at Enoch Pratt Free Library #14 (Pimlico branch), she met her future  (now former) husband, Louis. By the time they married in 1962, she was working for the National Academy of Sciences in Washington, DC. In 1968, they moved to Rochester, NY, where Louis began a PhD program at the University of Rochester. Rosalie took employment as a tumor registrar at Strong Memorial Hospital’s then brand-new Cancer Center (now known as the Wilmot Cancer Institute). She remained in that position for 41 years, becoming a member of both the state (NYCRA) and national (NCRA) cancer registrars’ associations and occupying leadership positions in both organizations along the way. She was also valued staff for the semi-annual next-to-new sale at the Harley School, where her daughter was educated. From the late 1980’s through the early 2000’s, she further served her community as a Monroe County election inspector. In 1986, Rosalie joined the Evangelical Lutheran Church of Peace, holding various council positions, as well as appearing in the choir and as a soloist, until the church dissolved. From 1996-2002, she was also known as Lady Elswyth Rosamond in the Society for Creative Anachronism, earning recognition at both the local and regional levels for service as an event registration clerk and participating in the group’s choir.

She is survived by her brother, J. Edward Poorbaugh (b. 1953) and his family; her sister, J. Elaine (Poorbaugh) Heins Parker (b. 1954) and her husband; and Lee C. Hillman (b. 1972), who now resides in Pittsburgh, PA. She is fondly remembered by the many, many friends and loved ones who enjoyed her generous and loving spirit throughout her life, especially Dianna, Debra, Mike and Toby, and her remaining Peace Lutheran family. Her joys included music, a good mystery novel, and any excuse to laugh long, loud, and hard. Her family are glad to imagine that the Harry Y. Carter, Jr.  Band has one more member now.

There will be no memorial at this time; we expect to hold a celebration around the summer solstice, in conjunction with her birthday

The family respectfully requests the honor of NO flowers