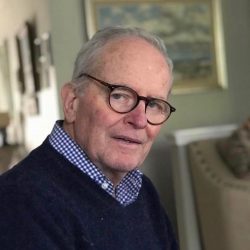 Charles Edward Conway originally of Fairfield, Connecticut and Manchester, Vermont, passed away on Saturday, March 5, 2022 in Rochester, New York. He died with dignity and grace after a long battle with Alzheimer’s.

Charles Edward Conway was born in Bridgeport, Connecticut, to Arthur and Helen (Dunnigan) Conway on September 9, 1936 and grew up in Trumbull, Connecticut. He went to high school at Fairfield Prep (Fairfield, Connecticut) and graduated in 1954. He went on to earn a degree from Fairfield University and graduated in 1958. He worked as a distributor and trader of coal for various companies Sealand, Ohio River Company, Coal Arbed, and Rhurcoal. He was a proud alumni of Fairfield Prep and Fairfield University, both Jesuit institutions. He was proud of his membership to the Gaelic American Club in Fairfield, Connecticut. He enjoyed watching both Fairfield University and Xavier University basketball games, skiing, playing golf, reading the New York Times, and the New York Post. He enjoyed spending time in both Jamaica, and Manchester, Vermont. He was a dedicated husband, father, and grandfather.

Instead of an immediate funeral service, a mass and celebration of Charles Conway’s life will happen at a later date in Fairfield, Connecticut. In lieu of flowers, memorial donations to the Alzheimer’s Association may be graciously appreciated. act.alz.org