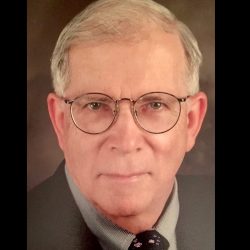 Dr. Egils Veverbrants, 86, died of cardiac and Parkinson’s-related complications at his home on Tuesday, March 8, 2022, with his wife Rasma Klints Veverbrants at his side. He leaves his beloved wife and partner of 53 years, his daughters Anda Veverbrants (Christopher Barnard) and Mara Perry (Sean), his sister Dagny Veverbrants, and two loving grandchildren. A private memorial service was held on Saturday, March 12, at White Haven Memorial Park. Egils will be deeply missed by his family and all who had the fortune to know him. A healer and a teacher at heart, he had a generous desire to share what he knew. The world will be darker without his gentle manner, the twinkle in his eyes, his dry sense of humor and his quiet but encompassing warmth.

In continuation of Egils’ life-long support of physicians and medicine in Latvia, in lieu of flowers, donations can be made to the University of Latvia Medical School where he relished teaching, felt welcomed and at home, and humbly received an honorary Doctorate in 2004:

With your check, please include the following memo to assure your donation is properly allocated:

Egils was born in Smiltene, Latvia, to Dr. Arnolds Veverbrants, a neurologist and researcher, and Emma Šnickis Veverbrants, a talented and internationally recognized student of Isadora Duncan and diplomate of her school of modern dance. Egils’ early childhood was carefree, spending summers at the family farm, “Višņi,” where he herded cows, rode horses, and played in the mud with the family sow, Rosalija.

WWII interrupted these easy days. Emma and the children left Latvia while Arnolds remained, charged to evacuate the hospital where he worked (Rīgas 1. Slimnīca). The family reunited and settled in Lübeck, Germany, where Egils attended a British Boys’ school and honed his dry sense of humor.

In 1950 Arnolds emigrated to the US, finding a position at the Concord NH State Mental Hospital. Sadly, he passed away soon after, in 1952, listed as the first documented case of Polycythemia Vera, a chronic blood disorder. Egils took work as an orderly at the hospital to help support the family, where a mentor reinforced his interest in medicine. The family lived on hospital grounds, which once found Egils sprinting, shirtless, after a runaway patient. Egils joked, “One with nothing on top and the other with nothing on the bottom!”

Gil earned his Bachelors’ degree at UNH, enrolled in ROTC and ATΩ. He fulfilled his army obligation serving two years as first lieutenant, during which he lost partial hearing from premature artillery fire. He was accepted into the graduate engineering program at MIT but opted to follow in his father’s footsteps and pursued a medical degree at George Washington University. Being slightly older than most incoming students, his dedication elevated him to the top of his class and he was selected to join ΑΩΑ, the national medical honor society. His training included the unique experience of simultaneously delivering babies to both a mother and her daughter in tandem (3 generations)!

Egils researched diabetes as an intern and resident at the Harvard Service of Boston City Hospital. Around this time his best friend underwent the first kidney transplant between non-identical twins, cementing Gils’ interest in nephrology, the study of kidneys and their diseases, including diabetic nephropathy.

A two-year nephrology fellowship at Brown University and Rhode Island Hospital followed. It was during this period that he married his life-long love Rasma. Egils and Rasma met through the American Latvian society while Rasma was working as a biostatistician for the renowned Dr. Hugo Muench. Egils was immediately drawn to Rasma’s intelligence, commitment, and passion, but it took several invitations before Rasma would agree to a dance.

The young couple, Wi-𝜋 (Rasma) and 𝜋˗𝜋 (Egils), spent evenings exploring Providence on walks with their rescue dogs, singing made-up songs and playfully howling at the moon. Always a gentle and compassionate soul, Gil had rescued one of the dogs, Divi, from a hospital research lab after she had made eye contact and “winked” at him from her kennel. He couldn’t bear to have her surrendered to euthanasia and convinced the lab to let him take her home.

In 1970, Egils accepted a position at University of Rochester, working at Rochester General Hospital as a nephrologist under Dr. Donald Kamm. Thus, the couple relocated to Fairport, NY. Despite prolonged absences in later years, became their permanent home base. That October, the couple welcomed their first child, Anda, followed 16 months later by Mara. The family was small but tightly knit, and his daughters remain best friends to this day. While fatherhood became a defining aspect of Egils’ life, he and Rasma still enjoyed socializing and would host dinner parties for friends and colleagues, hosting the first wine tasting party in the area.

In 1977 the family relocated to England for a year while Egils enjoyed a sabbatical conducting research at Hammersmith Hospital. Gil had caught the travel bug and two short years later signed the family up for an even bigger adventure, accepting a contract to work in Saudi Arabia.

The decision surprised Rasma, and there was a lot of discussion, but she agreed to the adventure and the family relocated to Taif, where he was stationed at The King’s Hospital in Al-Hada from 1980-1984. Experiences ranged from treating Bedouins with medical conditions rarely encountered in the US, such as leprosy and leptospirosis, to attending royalty in high-end suites with 24 karat gold faucets. One of the greatest perks of Egils’ contract was the inclusion of covered airfare expenses, which he leveraged to the family’s advantage with 2 around-the-world trips. The family explored numerous countries and has stepped foot on every continent except Antarctica.

Following their time in Arabia, the family returned to Fairport and Gil resumed his career with the University of Rochester, working at St. Mary’s and Town House before returning to work at RGH. He never retired completely, working until his final days, always well-respected and loved by patients, students, and staff. Mara spent a summer working at St. Mary’s and fondly recalls that any time she passed him in the corridors a chorus of people greeted him with a jovial “Hi, Dr. V!”

Egils’ love of his birthplace, medical curiosity, and a desire to see the repercussions of Soviet occupation brought the family to Riga for the First Worldwide Latvian Physician’s Congress in June of 1989. Latvia’s dire need for modern medical knowledge and supplies spurred Egils and Rasma to collect and ship pharmaceuticals and supplies on a weekly basis, despite staggering logistical struggles. Professional connections led to a sponsorship for Dr. Aivars Petersons to study Western nephrology practices. Aivars lived with the Veverbrants, becoming a lifelong friend and collaborator. Egils and Aivars later co-authored the textbook “Nephrology in Your Pocket” in both Latvian and English. A review from a nephrologist “Remarkably concise, yet complete. It’s a great reference to have in your pocket to show students pathology and to summarize complex issues in an elegant way… Very cool” which well summarized the book’s intent.

Egils began volunteer teaching semi-annually at the University of Latvia’s Medical School. In the 1990s Egils and Rasma bought a condo in Riga which they so beautifully remodeled that it was featured in a Latvian architectural magazine. This served as Egils’ homestead while teaching and was a place where he would host friends, colleagues, and students for laughter-filled dinner parties. Egils taught in Latvia until Covid-19 restrictions put a halt to international travel.

Egils was multi-faceted, but due to his humility and modesty few knew the depth of his interests or knowledge. When his daughters were very young he taught them to waltz. They would stand on his shoes as he went through the steps, thereby moving their little feet with his, counting “one, two, three, one, two three…”. He loved and knew classical music, as well as Latvian and American folk songs. As a youth in Concord he conquered American hymns! The family has warm memories of Egils reading Tolkien as the foursome snuggled, piled into the parents’ bed, while he made up tunes for the verses and songs. “Ho! Tom Bombadil, Tom Bombadillo!…Bright blue his jacket is, and his boots are yellow.” He retold stories his mother had creatively composed, in particular of a squirrel named “Vāverīte Kuplastīte”, (Little Squirrel with the Bushy Tail).

He was an avid student of history, studying battles, geographical changes and tactics. In Latvia while at the family farm in 1944 he saw the neighbor’s property afire at the onset of the battle of More, a three-sided battle between the Latvians, the Germans, and the Russians. His family was forced to abandon their farm to escape. In 2017, Egils brought the family to the family farm, which the family recovered following the fall of the Soviet Union. The family toured overgrown trenches and bunkers as Opī (Grandpa) explained tactical details and other impacts of war, such as that the area, previously a source of lumber with sustainable practices, could no longer be harvested due to residual shrapnel. For history’s and curiosity’s sake, the family also went on a treasure hunt following vague memories of where these valuables might have been hastily buried. While no physical treasure was recovered, a beautiful day was spent in the Latvian countryside, and the family came home with a treasured memory.

Egils was fluent in English, Latvian, and German, knew his Latin, and a little Russian. Rather than whispering to keep secrets from the children, he and Rasma would simply switch to German. Egils also made sure to learn some colloquial phrases in Arabic and other languages along the way, for good measure. Al-hamdulillah!

He was an avid chess player with a chess standing, and through dedicated effort passed his love of chess to his children and grandchildren (with varying success). He enjoyed sports, participated in track and played tennis throughout his life. Egils was also a man of his word. When asked what he would do upon retirement, he used to joke that he’d climb Mt. Kilimanjaro. For kicks, after his first retirement at the age of 76, he decided, “Why not?” Anda tried to talk him down to a smaller mountain, Mount Fuji, but he wouldn’t be swayed. He created and followed a stringent training regimen and, with long-time friend and colleague Lori Spaulding, conquered the mountain in 7 days from base to summit and back again. It was on this trip that he earned the nickname “Babu” – which means “grandfather” in Swahili.

He loved his grandchildren deeply. During the pandemic he Zoomed to tutor them in science and chess. With the resumption of international travel he coordinated the family trip to Iceland, hoping to sneak in a visit to Bobby Fischer’s grave. While that tourist stop was missed, the family enjoyed a helicopter ride over the volcanoes, soaking in a lagoon, and sleeping under the northern lights in a “bubble” hotel. He and the grandkids did play chess and debated the strongest opening moves.

He intended to fly from Iceland to Latvia to attend the 100th anniversary of the Beveronijas educational fraternity, which his father co-founded. Sadly, he missed the occasion as the ceremony has been postponed due to Covid. Latvian fraternities extended beyond educational affiliations, rather being multigenerational communities which helped hold Latvians together while in “trimda” (exile).