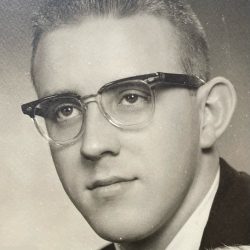 James Edward Francis (Jim) O’Brien passed away on Saturday, March 19, 2022 at the age of 84. After a long battle with Parkinson’s disease, Jim left this earth peacefully, with his loving wife Peggy and children by his side.

Jim was born in Rochester, NY on December 22, 1937 to father Charles and mother Frances. The youngest of three, Jim attended the Aquinas Institute, graduating in 1957. Offered a merit scholarship and his choice of several Catholic institutions to attend around North America, Jim chose the “international experience” of St. Michael’s College at the University of Toronto, graduating with a bachelor’s degree in chemistry in 1961. It was then and there that his lifelong fandom of hockey and the Toronto Maple Leafs was established.

Upon graduating from “St. Mikes,” Jim returned home to Rochester, beginning his career as a pharmaceutical researcher, and marrying Peggy in 1962. Together, they settled in Henrietta and raised four devoted children, Sean, Christine, Karen, and James. Jim’s professional career began with Strasenburgh Laboratories, and he remained at the same facility his entire career, through several mergers, including Pennwalt and Fisons, retiring from Astra Zeneca in 2000.

An accomplished analytical chemist, he authored 18 publications/presentations and played a key role in the early stages of bringing successful drugs to market. He was an active member of the American Chemical Society, and served as an executive committee member and treasurer of the Northeast Regional Chromatography Discussion Group.

In his career and life, Jim was an early adopter of all things technology and computers, and was also a hobbyist photographer. A piano player and classical music aficionado, he enriched his family’s lives and instilled in them all a similar love of music. He had a wonderfully wry sense of humor, demonstrated by his love of Monty Python and Seinfeld, and gave those close to him an affection for comedy as well. He enjoyed golf as well, working at Lake Shore Country Club as one of his first jobs as a young man, and could often be found walking 18 on Monday afternoons at Lima Country Club. Upon retirement, Jim became a full-time grandfather, focusing his love and energy on his four children and eight grandchildren.

In lieu of flowers, the family requests that anyone wishing to honor Jim’s memory do so by making a philanthropic gift in his name to the Parkinson’s Disease Research Fund (A03934) at the University of Rochester Medical Center. Gifts can be mailed to: URMC Advancement, 300 East River Road, Box 278996, Rochester, NY 14627, or made online at: http://giveto.urmc.edu by selecting designation “Other” and noting “Parkinson’s Disease Research Fund (A03934).”

“Remember that when you leave this earth, you can take with you nothing that you have received – only what you have given: a full heart, enriched by honest service, love, sacrifice, and courage.” – St. Francis of Assisi