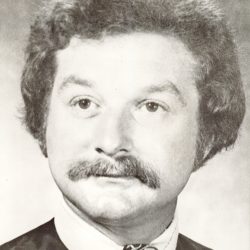 Passed away peacefully in Florida on March 31, 2022, with family by his side.

“Brownie Brothers” Cleaners was a staple in the community. He started working at the family business when he was 11 years old and remained there until he retired. He was also a past Chief of the Genesee Valley Fire Department. He was most notoriously remembered for being a Henrietta Town Justice from 1971 until 1980. At the time, he was the youngest judge ever elected in Monroe County. Many appeared before him or knew someone who had. Dave has always had a love for motorcycles. In his younger years, he raced at Paradise Speedway in the early ’70s. He initially started at 125cc and finished at 250cc expert status. He still owned and rode a motorcycle up until the last year or so before his passing.

The original “Mad Hatter” or “Hat Maker to the Stars” was also what he was known for. He made many hats for movies, stars, sport athletes, and Nascar drivers, Richard Petty and singers; Charlie Daniels, Ricky Martin, Billy Joel, Elton John, and Garth Brooks to name a few. Some of the movies include Mulholland Falls, Last Man Standing, True Grit, Road to Perdition, Benjamin Button, Chicago, plus many more. Tom Hanks, Leonardo DiCaprio, Paul Newman, James Caan, Johnny Depp, Chris Penn, Nick Nolte, Matt Damon, Christopher Walken, and many others are among the stars who had gotten hats made by him. There are simply too many to list, so please see www.davebrownhats.com for more information.  You can view a Channel 13 video about Dave below.

In lieu of flowers, donations can be made to The Leukemia and Lymphoma Society (WEBSITE) or Rescued Treasures Pet Adoption (RTPA) (WEBSITE)