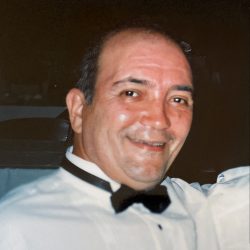 Joe immigrated to Brasil in 1957 at the age of 19. He then met his wife, and they married in 1959. Shortly after, the two started their family in Brasil. Joe formed his own company working in ironworks. At this time, there was civil unrest in Brasil. The military took over the civil government, making it impossible for business owners to survive. Joe lost everything and decided to start over. In 1964, he immigrated to the US. It was a struggle at first, but he was able to start working for GM in 1968. Two more daughters were born and life was more promising. He retired as a skilled tradesman with over 30 years of service.

Joe loved working with his hands. He was always working on a project. Family was essential to him in the US and Brasil, including his beloved pets that he had throughout his life. Despite struggles, Joe made it a priority to create blissful memories with his girls. He then carried on the tradition with his grandchildren – no matter the distance. He was definitely a family man and those of us who he is survived by will hold the memories forever in our hearts.

A celebration of life will be held on Thursday, May 12th at 10 AM in the Interfaith Chapel of Miller Funeral and Cremation Services, Inc., 3325 Winton Road South. The service will be Live Streamed for those unable to attend through the funeral home website and the View Live Services tab.

In lieu of flowers, contributions may be made in his name to the Alzheimer’s Association, 435 East Henrietta Road, Rochester, NY 14620. Donate Online