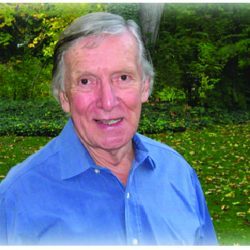 Bill was born on January 15, 1925 in Ponca City, Oklahoma, to William T. Pearce and Mary Fitzgerald Pearce, and grew up in South Buffalo during the Depression. He enlisted in the Navy at age 16 for WWII and spent four years in the Pacific aboard the USS Windsor, with landings at Guam, Okinawa, and Peleliu. After the war, he earned a B.A. in English and Philosophy from the University of Miami and, after some graduate work in education, returned to Japan to teach English in Tokyo. After a few years, he returned to the US and for an M.S. in Radio & Television from Syracuse University.

In 1961, he moved to Providence to take the position of Director of Radio and Television for Brown University and later moved to Long Island to manage WLIW-TV. Then in 1969 he landed the position of President and General Manager of WXXI and moved to Rochester. Bill led WXXI for 26 years and built the station from the ground up—from the basement of the old East High School to where it stands today on State St.

During his tenure, WXXI added 91.5 FM and 1370 AM. The station received two Peabody Awards for radio show Fascinatin’ Rhythm (‘94) and TV show Safe Haven (‘87) as well as numerous other radio and television programming and educational awards. Bill and WXXI also received two Silver Gavel Awards for Public Affairs Programming in 1985 and 1987.

Among his other programming initiatives, two highlights were the Presidential Interviews series including George H. W. Bush at the White House (and others) and the Rochester I Know (the archives of which can be found online). After retiring in 1995, he devoted himself to media consulting and teaching communications at SUNY Brockport. In 2013, a stroke resulted in severe global aphasia, which left him with the inability to understand or express himself in language.

He was a proud member of the Citizen Potawatomi Nation. He loathed entitlement and complacency and valued planning and punctuality. He loved skiing, tennis, pilates, words and wordplay, books, and history—especially the American presidents, the Second World War, and most of all, Indigenous history and politics. He was a life-long learner who sought to study and understand history as a moral responsibility that endured throughout his lifetime.

Bill loved Rochester. In retirement, a perfect day for him was coffee and three newspapers, shopping at the East Ave Wegmans for “health food,” hours in the bargain books section of Barnes & Noble, a long walk at Cobb’s, pilates at the Y, a salad, and in the evening, a book, popcorn, and a fire in the fireplace.

The family would like to thank the staff at Greenspring Senior Living, Heather Heights, and The Friendly Home, and Nick VanStaalduinen of Senior’s Choice Management for their love and devotion to him for the last seven years. Memorial contributions may be made to Friends of Ganondagan.(WEBSITE)