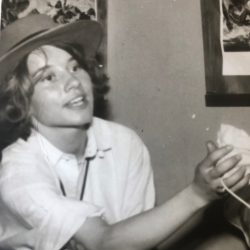 Rochester: Jeanne Marie Sullivan (Verliac) passed away peacefully on June 2, surrounded by her loving family. Jeanne was born in Paris, France in 1939, where years later she met William Sullivan while the two worked in a shelter that served the city’s homeless. The two married in 1965 and had six children: Pierre (Ying), William, Jeanne (David), Moira (Mark), Kathleen, and Siobain (Blake). She also was the beloved Nana of fourteen grandchildren.

Had it been possible to bottle Jeanne Sullivan’s essence and sell it, an inevitable war would have erupted between New York socialites, celebrities, covergirls, and lost generation authors seeking a muse. Her mind-meltingly effortless style and personality certainly inspired the phrase je ne sais quoi, despite the term preceding her birth on February 22nd, 1939 in Paris, France.

Though she spent her youth bathing in the sea-breeze of the sunny Mediterranean, Jeanne held within her the utterly Parisian power of love we all desire to capture today. This love was spread with simultaneous decadence and delicacy amongst her six children, fourteen grandchildren, and a series of (often deformed or rather ugly) cats and dogs. Her greatest love, the stuff of dreams, was reserved for her beloved husband, William (Bill) Sullivan. This legendary love, emulated by all those who witnessed and spurned only (legally) by the Catholic Church began when Boston-born Bill entered the Paris seminary as a priest- though deeply faithful, the world had something else in the cards for him. One day, he met the beautiful, stylish Jeanne; but more importantly, she met him. Those who knew Jeanne know that when she wanted something, she would get it, and she would get it herself. She told Bill that she would marry him, and returned to the church the next day. She jumped atop the table that for centuries had separated the lay community from the priests and kissed him then and there. One could argue her reformation rivaled Martin Luther’s. It was that moment that Bill knew this woman was his world. The couple’s adventures together would span Europe and America: one such adventure brought them near the Spanish border, hiking. Soon, they stumbled upon a group of Spaniards leading a fearsome bull with a pack of cigarettes attached to his horns.
Jeanne and Bill inquired about the closest location to wine and dine, and the group answered rather cryptically: if one of the couple was able to remove the package of cigarettes from the bull’s horns, they could share the group’s dinner. Bill laughed this off, prepared to walk until they found a place to rest and eat, but the laugh had barely left his throat when he looked to his right to see his wife, a cigarette between her teeth.

This was Jeanne: fearless and looking good doing it. Any problem, ache, bruise, or tear from her grandchildren would be solved in the blink of an eye, whether with a brusque French phrase, a tight hug and smooch, or a scoop of ice cream. A persistent survivor, Jeanne lived through the terrors of the Second World War and remained with a smile on her face until she said her peaceful goodbye. She never wasted anything, cutting mold from the crusts of bread and squeezing every bit of fun from a day spent with her grandchildren. Every home she lived in was graced with quirkiness and mystery, much derived from bags and bags of trash brought home by her sidewalk-shopping husband. Jeanne could pull a diamond ring from a compost bin, and restyle a dirty sheet into a gown. She never forgot a face, and she was a ceaseless defender of those she loved. Her opinions were never quiet, and if she did not like your haircut or the way your skirt fell, she would most certainly inform you. Her beauty and determination is the kind that cannot and will not end. But most importantly, as remembered by all those who knew her: Jeanne never entered a pool by jumping. She did not feel safe doing so. Every day, she would plunge into her ice cold backyard pool in a perfect, splash-free swan dive.