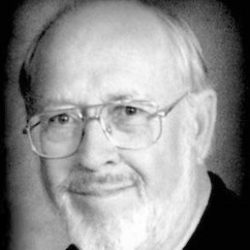 Harold David Manning, of Rush, NY, passed away on June 9, 2022, in the arms of his loving family. His wife Doreen had left us just five weeks earlier, on May 3rd. Together nearly 74 years, they were inseparable, and he just wanted to be with her again, forever.
Harold was born October 7, 1925, in Beaver Falls, NY, to Jeremiah Clifton Manning and Bessie Arvilla Cougler. He played trumpet and basketball in school, and was active in scouting. After high school, he was a draftsman for the US Geological Survey, in Washington DC. In 1943, Harold joined the US Navy, serving as an electrician in the SeaBees. While attending the SUNY Teachers College at Oswego, Harold was playing soccer when a pretty coed caught his eye. Doreen Henley was also an Education major. They married June 24, 1950, and both graduated in 1951. Hal went on to Syracuse University where he earned his Master’s degree in Education, and became a lifelong SU basketball and football fan. During their schooling, both Harold and Doreen were counselors at Camp Beechwood, and lifeguards at Green Lakes State Park during the summers. They did so even after the birth of their first two sons, all four living in a tiny Trotwood travel trailer!

Hal taught high school Industrial Arts at Rush-Henrietta for 24 years, and was the department head. Believing strongly in the value of learning practical skills and trades, he influenced the lives of countless young people. He was also a Driver’s Ed. Instructor, and spent summers building houses. Hal was active in the Rotary and Kiwanis clubs, served the town of Rush as a recreation director and town councilman, and was a past commander of the Stevens Connor American Legion post.

In 1976, Harold and Doreen both began careers in real estate. Starting with the Town Crier agency, they eventually bought it and created Manning Properties, which became Coldwell Banker Manning Properties. They restored the former Monroe Academy headmaster’s house in Henrietta as their office. With their hard work, integrity, and professionalism, it became one of the top agencies in the area.

An avid boating enthusiast, Hal and Doreen restored numerous boats, even buying one off the bottom of a bay. Hal didn’t believe in the word “can’t!” They enjoyed family time cruising the lakes and canals of NY, later learning to sail and race Thistles. On a sailing trip to the Virgin Islands, they purchased a Pearson 390 charter boat, and enjoyed trips exploring the Caribbean. The “Skybird” was later exchanged for “Dress Blues,” an Albin 43 trawler. It was their winter traveling home, between summers in Rush. Later, they made Florida their winter home until living in Rush full time, near all their children. Harold was always the fearless instigator for their numerous ventures, investments, adventures, etc, while Doreen figured out how to make it happen. They were an incredible team.

Hal always had something new he wanted to do and experience. Throughout his lifetime, this included hunting, raising and training Labradors, snowmobiling, skiing, traveling, golfing, tennis, scuba diving, “playing” on his backhoe, and even taking up painting in his later years. His paintings are a now treasure to his family. Harold had a deep appreciation for his parents and all they taught him, for his siblings and extended family, and for the family he and Doreen created. He was a firm yet loving father, supporting, guiding, and inspiring his children throughout our lives. He will be deeply missed, and always in our hearts.

An outdoor celebration of life will take place at home, in June.