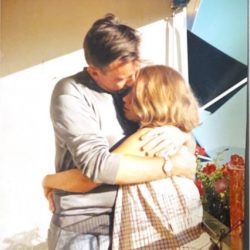 William Joseph Sullivan passed away peacefully on June 24, surrounded by his loving family. He is predeceased by the love of his life, his wife Jeanne, who died just three weeks before. William and Jeanne met in Paris, fell in love, and went on to raise six children: Pierre (Ying), William, Jeanne (David), Moira (Mark), Kathleen, and Siobain (Blake).

Dr. Sullivan served as Chair of the Religious Studies department at St. John Fisher College, where he retired as a professor emeritus. He was also a devoted, fun-loving grandfather of fourteen grandchildren.

Trash is merely a collection of used items. In the past, those items were valued, loved even. At some point, whether voluntarily or not, they were determined to be useless and consequently disposed of.  When something is lost, out of sight, forgotten, does the love and value it once possessed dissolve into dust and take to the wind, never to be seen again?  Some would say so. But not William Sullivan. Bill never met a bag of trash he didn’t love. His children and grandchildren received Christmas gifts picked from the rubbish, though the pains taken to obtain those gifts and the love that went into them was far more immense than that which went into anything their friends received.

It is comforting, truly, to know a man who loves trash. More so, to be loved by him. His love is unconditional; one could be at their worst and he would pluck them from the wreckage to ascertain their value.  He found his greatest love, his wife, not in the trash, but somewhere unexpected. He should not have married, truly. It is usually frowned upon by the Catholic Church for a priest to wed. Perhaps it was a bit jarring that one day in Paris, when a beautiful woman leapt across the church barrier to kiss Bill. But, in his own words, “Thank God she did.”

Bill found those at their worst and made them feel like precious gold. He cared for the less fortunate, mourned those who were lost, and taught those who questioned. Speaking to Bill was like opening an ancient tome, one that would keep you captivated for hours but somehow leave you with more questions than you started with. Bill gleaned facts and information carefully from every book, article and photo he ever held. He leaned in to listen to any story being told. He refused to settle with a single answer or solution. He teased and laughed, but he always, always wanted to help.

As his beloved wife suffered illness in the last few years of her life, Bill never left her side. It was rare to find them without their hands clasped, eyes only seeing each other. They never parted without saying “Je t’aime.”  Sometimes, when you’ve truly met the one you are meant to love forever, you will be granted the right to always be with them. Bill was blessed to hold the hand of his beautiful wife forever, going to meet her in Paradise a few days after she departed. She was the one with style, after all; she merely had to tidy the place up for him.

Bill’s love of trash was a recognition of the value those items had before they were disposed of. They were loved, once, and Bill caught that love before it disappeared. This ability is proof that the love we have for something, or someone, never goes away; even when we cannot see them. Let us bottle the love Bill brought to us, and the love he and Jeanne shared, and let its ferocity overtake us.