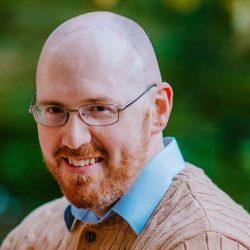 Douglas Joseph Hughes came into this world September 2, 1980 in Port Jefferson, NY. At 2 weeks old he made his first move to Huntsville, Alabama. He would move nine more times with his family until settling in Pittsford (and ultimately Fairport). He always made quick friends and won hearts with his ready smile and encompassing hugs. There was never a baby or animal that could resist him. His warmth and quiet demeanor was irresistible to them.

Growing up, Doug played baseball and football, and he wrestled. He even kicked a football at halftime at a Bears game in Soldier Field.

He finally decided being a spectator was more his speed, becoming an ultimate fan of the Mets, Jets, Rangers, and Syracuse basketball. Being a season ticket holder for two years at Syracuse was a highlight for him.

Doug graduated from Pittsford-Mendon High School. He earned his degree in Software Engineering from R.I.T. and would later receive his Masters from The Simon School of Business.

He met and fell in love with Kate Benson. They were married September 4, 2004. She was the love of his life. Together they traveled and had many Disney adventures that brought him great joy. They became the game masters, introducing new fun and laughter into the family. They also made lifelong friends through games. Doug’s quick wit at the most unexpected times made him the one you wanted to sit near at any game night or dinner. Especially if it was one of his mouth-watering creations from the smoker. He was a perfectionist, but was willing to eat even his mistakes.

On May 23, 2018 Kate gave Doug the ultimate gift of love in Juniper and Lucas. His pride and bliss was never ending from the moment they were born. He loved just looking at them and felt his love grow as they did. He loved their laughter when he tossed them in the air or ran in circles (not sure if he was chasing or being chased). He designed and built them an over-engineered sandbox and was rewarded by them loving to play in the sand with him.

There were countless hours of reading, using special voices to bring the stories to life for the twins. Doug was always up for a spontaneous dance party or a high push on the swings. Even when he was bedridden the sound of their voices or a kiss on his nose lit up his face.

Unfortunately the shadow of tragedy was cast upon them. In February of 2019 Doug was diagnosed with Glioblastoma. Two days after surgery Doug was anxious to resume a normal life and beat cancer. He wanted to return to his co-workers at L3Harris immediately, but the family insisted he heal up for a few weeks. “It’s just brain surgery!”

For almost three years he fought and seemed to be winning. The tumors returned and despite his many efforts his body succumbed June 28, 2022.

Also his family through Kate that welcomed him and made him feel loved; Elle (Ralph) Finizio, Mark (Cynthia) Benson, Kim (Jim) Minisce, and Kris (Chris) Rimlinger.

A note of faith, take comfort that Doug was greeted in heaven by many wonderful animal companions including Tally, Benny, Vega, and Io that ran to welcome him home. He is probably organizing and winning a card game, smoking a brisket, and drinking the best root beer.

Kate would like to thank everyone for their extreme generosity over the last several years. The financial, emotional, and consumable outpouring over the last few years has been overwhelming. In addition to the immediate family, she would specifically like to acknowledge the Dorr, McConnaghy, Jeffords, Skiff, VanHoff, Weiss, Maheu, Brasse, Rock, Hosier, Hiltz, Stoetzel, Vitale, Reinholdt, Palcich, and Brundage families. A special acknowledgement to the entire L3Harris family. Thank you cannot be said enough times to cover it all.

If you wish to make a contribution to the children’s college fund, please visit https://www.gofundme.com/f/doug-hughes or make a direct donation via Venmo to @Kate-Hughes-28