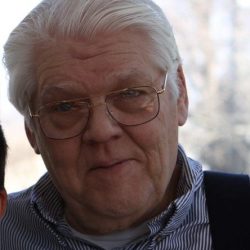 Steven Michael Rogers, 76, passed away suddenly on July 3rd, 2022. Steve is survived by his loving wife of 57 years, Eleanor Rogers; children, Mike Rogers, Susan Runyan (Timothy) and Nancy Bennett (Brian); grandchildren: Julian Bennett (10) and Anna Bennett (6).
Born February 7, 1946 in Long Beach, California, he joined the United States Air Force and married in 1965 to his loving wife Eleanor. Early in their marriage, he and Eleanor moved often, living in Colorado, California, Washington, Alaska, Alabama and then finally settling in Webster, New York in 1981. Steve’s love of math, science and technology led him to a career as a Software Engineer. During his career, he worked at Kodak for over 40 years until his retirement. He made many lifelong friends at Kodak and was well loved by his coworkers, especially over many lunchtime games, jokes and general workplace pranks and shenanigans. In addition to working at Kodak, he wrote a book on programming, and also started a business in the 1980’s called Microdigital through which he developed video games. He also had a love of photography, classical music, baking, cooking, and had a huge soft spot for animals. He was “Mr. Fix It” and had a long history of family appliance and miscellaneous electronics repairs. To him, nothing was beyond fixing. He is best known by all for his impish sense of humor, making his own rules and being a harmless troublemaker. Most of all, he is remembered for his love and devotion to his wife and family, especially his two grandchildren, whom he adored with all of his heart. He had a deep interest in both his children’s and grandchildren’s education. He would often work with them on numerous technology, music and math projects, the most recent projects involving his grandson. Years ago, Steve and his wife would eagerly take their grandson to his violin lessons every week at Hochstein School of Music. His grandson and granddaughter are still thriving musically at Hochstein, and credit their Grandma and Grandpa for being instrumental in making it possible. His daughters credit their father with their interest in math, technology and science which led to their careers in technology as well. Even though he left us too soon, he was surrounded by family and living at home until the end, which is exactly the way he would have wanted it.

Memorial donations can be made in Steve’s name to the Hochstein School of Music, 50 N Plymouth Ave, Rochester, NY 14614 Click to Donate Online