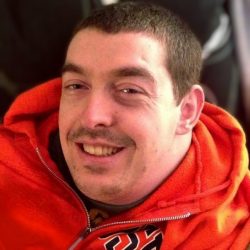 Matthew D. Willson, age 41, of Farmington, NY, went to heaven on Friday, July 15, 2022, following a brief but tragic event. He was so tremendously loved and respected, and he touched many hearts during his stay here on earth. A devoted, dedicated, compassionate, philosophical, intelligent and humorous young man, Matt left his mark and legacy on the many whom he crossed paths with.
He graduated from Victor High School in 2000, although the Class of 1999 are his true classmates. Due to a serious surgery at the start of his Senior year in school, Matt was unable to graduate with his friends and had to become a super-senior as he had spent his entire Senior year in the hospital. Matt continued his education upon graduation at FLCC and obtained an Associate in Arts degree. From there, he continued on to RIT to graduate with a Bachelor of Science in Information Technology holding a 3.50 GPA.
Unable to secure employment due to his disability, Matt continued his education as he was always wanting to learn more. He was a student of life, obtaining 2 more associate degrees at FLCC and finished with a 3.67 GPA, culmination of 10 total semesters. Matt deeply loved and was grateful for his family who took care of him at home his entire lifetime. He so enjoyed attending Syracuse and Buffalo Bills football games with his dad and best friend, Mike. Matt loved music and was especially fond of the Gin Blossoms who became friends of his over the years and would often invite him backstage and to their rehearsal.
Matt was a co-owner of the Mexico City Aztecs in the Simulation Football League as well as all time scoring QB, #12 Matt Willson. The SFL gave Matt the legs for running that he had never had. While participating in the SFL, Matt also became a popular and beloved sports broadcaster of the games with best friend, Mike. He took on the world and all it had to offer. Matt overcame many obstacles in his life regardless of his disability. Born with a brain stem tumor, Matt became a quadriplegic at a very young age. It never stopped him. He saw adversity as a challenge. He saw negativity and turned it around. No mountain was too high for him to figure out how to maneuver. Life was for living and Matt hit it full steam ahead. May we all learn from this child of God. As Matt used to say, “I can choose to be happy or sad…I choose happy.” Our hearts are in a million pieces, but we rejoice in heaven’s new angel.
Matt was born May 25, 1981, in Canandaigua, NY. He has lived in Farmington with family his entire life. He has left behind his mother, Carol Birdsall (Willson-Bromka) and step-father, Ronald Birdsall of Melbourne, Florida, a father, David Willson, brother, Daniel Willson and sister, Abigail Bull (Willson) and her husband, Adam Bull of Farmington, NY, niece, Zoey, nephew, Jaxon, step-brother, retired officer, W4 Christopher Birdsall of Washington, DC, aunts, uncles and cousins as well as ever-devoted best friend and “brother”, Michael Daggs. He was predeceased by his doting grandparents, Ida and Henry Bromka of Ovid, NY and John and Winnie Willson of Interlaken, NY.
Fly high, Matt….run fast with your new legs!
Please consider a donation in Matt’s name (Matt Willson #12) to the Simulation Football League through PayPal to Cameron Irvine at Simulationfl@gmail.com. It would mean the world to Matt and to his legacy.