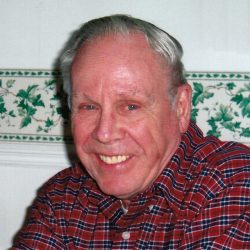 After graduating from high school, he attended Penn State, then moved to Rochester, and graduated from Rochester Institute of Technology with a degree in electrical engineering. In 1956, he was drafted into the US Navy where he served much of his time on the destroyer, USS Bristol. Roger then settled in Rochester, married Katherine Dowling and became the proud father of 6 children. He worked at Eastman Kodak as a Senior Product Designer and retired in 1992 after 30 years. Upon retirement, he enjoyed exploring national parks, researching genealogy, playing double-deck pinochle and euchre, attending jazz concerts, going out to dinner with friends, and most importantly, hosting family holidays at both his home and cottage.

Roger is predeceased by his wife, Katherine, and his sister, Josephine G. Stouffer.

A special thanks to the nurses and staff on the Selden unit of the Friendly Home for their compassionate care.

A private service and interment for immediate family is planned.